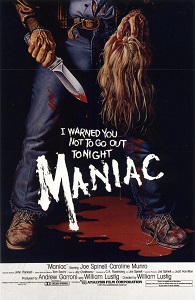 “I warned you not to go out tonight.”

Despite an impressive 6.5 on IMDb and some inventively gruesome FX work from Tom Savini (who later suggested be might’ve gone ‘too far’ with some of it), I’ve never really liked much about this depressing release, which would pair well with Don’t Go in the House. Less a straight-up slasher flick, more of a serial killer pic, in which Spinnell (who co-wrote and financed with his earnings from Cruising) is a schizophrenic madman who slashes, garrottes, and skewers his mostly young female victims, and keeps mannequins around his apartment that wear the dead girls’ scalps as wigs.

Between some extremely drawn out sequences of stalking and slashing, Spinell is nothing short of excellent as the perverse, slobbering killer terrorising New York City, in much the same way as Lustig’s later creation Matt Cordell would in Maniac Cop. The always lovely Munro – then wife of large financier Judd Hamilton – is a fashion photographer who dates him a couple times (if you believe that!) before he turns on her, but her role is minimal and she’s not really the heroine she would normally be set up as. 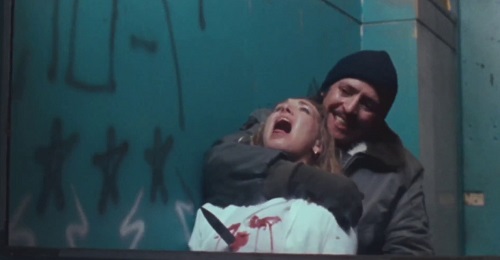 The film has something to say about the people we fear without being too patronising, instead substituting much if the usually dull psychobabble with the grotesque slaughters of five women and two men, with the infamous shotgun/exploding head gag that caused Gene Siskel to walk out of the screening. The film was cut to shreds in various regional releases and refused a rating in the UK, eventually seeping through with about a minute of cuts in the early 2000s.

A strange picture to be sure, but an interesting one if you can look past some of the repulsions that plague the otherwise incisive script. Spinell started work on a sequel, which would never be finished due to his death at 52 in 1989.

Blurbs-of-interest: Munro and Spinell worked together again in 1983’s The Last Horror Film; she was also in Slaughter High and Don’t Open Till Christmas; Lustig later directed the Maniac Cop trilogy and Uncle Sam; the film was remade/re-imagined in 2012 with Elijah Wood.

tagged with before they were famous, gore o'clock, Nu-di-ty, slasher, the 80s