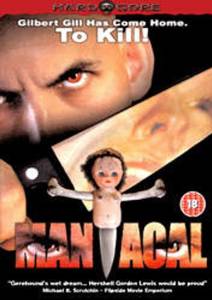 Laughter Lines: “Should we be watching all these slasher movies with my brother on the loose?”

A little extra merit for the sheer passion shown for the genre in this effort, which is about as retarded as its nominal madman, one Gilbert Gill, a ‘slow’ youngster who opens the film by murdering his kindly stepmother and attacking his abusive father and goody-two-shoes sister Janet.

The outcome can be seen rolling over the horizon for miles, but there are some cutesy references to such obscure slashers as Happy Hell Night, Cheerleader Camp and even Camp Blood as well as conversations about the irony of the situation.

Nevertheless, the characters are so stupid that they fail to call off their gathering, even upon learning Janet’s brother is back in town and has murdered several people! Meanwhile, dad and a singular law enforcement officer (also DJ’s father) drive all over the place looking for Gilbert while the local kids chant Freddy-style rhymes in the park.

With the obvious love for the slasher opus, Castro abundantly ladles on the gore on with some deaths so ridiculous it defies belief: A fork in the head is one thing, but heads that collapse into rubbery masses at the thrust of a palm, and the longest strangulation in history push the bar from campy extravagance to low-watt idiocy.

Good laugh: Janet’s reasoning with her brother after thirteen murders: “please stop this – it’s wrong.” Same thing should have been mentioned to the producers.

tagged with get your own ideas!, slasher, what the hell!?, who finances this crap!?