This month, let’s take a look at those films that either pretend to be slasher films and then turn out not to be and those that tip-toe through the gardens of slasherdom and beat a hasty retreat… 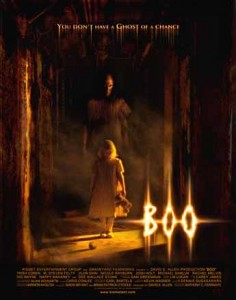 Setting up like another photocopy of Halloween, a group of teens go to party in an abandoned and ‘haunted’ hospital on All Hallows’ Eve where they are tormented by creepy hallucinations and turned into zombies with sloppy insides. It’s a little bit Session 9, complete with backstory revealed in segments by the inexplicably psychic heroine – something do with with a child-molesting patient and the nurse (Dee Wallace) who sacrificed herself to stop him escaping. There’s some good atmos in the first third but come the end, everything has been over-explained the way American supernatural horror films tend to do. Only a handful of eerie images – look out for that balloon clown – make a good film not.

Why it’s not a slasher flick really: the one-by-one schtick is intact but the zombies and ghosts swallow too much of the plot. 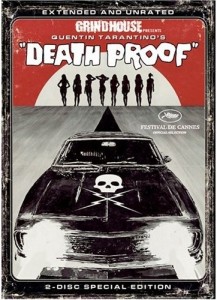 During the early hype for Grindhouse, Quentin Tarantino stated that his half of the feature would be “a slasher film at 200 m.p.h.” with nutjob stuntman Kurt Russell offing pretty young women. The final product has a few shots that bring back memories of Halloween and its ilk, but this turns out to be anything but a stalk n’ slasher. While it’s a fun romp once – albeit bogged down with way too much of QT’s ‘trademark’ dialogue – none of the slashers I’ve ever seen were edited this badly, had this sort of narrative or as much talking. It’s sky-high budget is visible through the cracks, making it look only pretentious, with annoying characters with oversized egos, all of whom talk like frat boys. The singular car accident is the high point and the stunts and cast are good but if anything, Death Proof shows that perhaps the director everyone has a boner for is a one-trick pony unable to create anything original, only add tiresome, irrelevant dialogue.

Why it’s not a slasher flick really: opposite case to Boo here, maniac killer on site but no one-by-one opus and way too much self-indulgence. 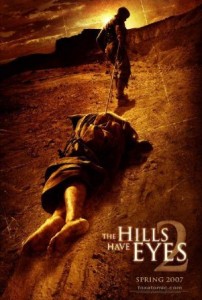 Wes Craven penned this with his son and, considering how much flack the ’83 film took, he’s managed to create something far worse here… An Aliens vibe pervades, with a group of National Guard trainees (all male, bar two) investigating some missing scientists in the desert. Dipping its toes in the torture-porn sub-genre with a brutal rape scene needlessly included (as in the ’06 film) and ample gore. Dialogue consists only of ‘fuck this’, ‘fuck that’, ‘fuck you’ and we don’t give a fuck about any of them anyway… The dog-flashback alone in Craven’s version outdoes this entire film.

Why it’s not a slasher flick really: it’s a siege-fest with no real pattern emerging for the sequence of deaths, though interestingly both the female characters survive… 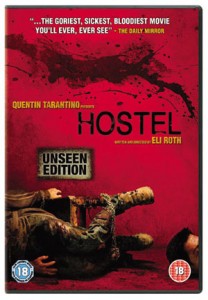 The granddaddy of the torture-porn (or gorno) movement, it’s not the done thing to say you like it, but Hostel is a genuinely good film, sometimes included in lists of slasher flicks. Tarantino protege Eli Roth directed the less interesting Cabin Fever and waxes lyrical about putting T&A back into horror blah blah blah…

Interestingly, the main victims here are a trio of boys who fall foul of a Slovakian operation that allows rich psychopaths to torture and kill captured youngsters for their own sadistic pleasure. Lead character Paxton is an unpleasant fellow to say the least and would be killed with prejudice in any other film. This turn-around on the standard gender politics of horror attempts to blot out any accusations of misogyny, although it’s littered with naked girls and it’s even grislier sequel traded out boys for girls and so took this as permission to show sexualised violence and get away with it.

Why it’s not a slasher flick really: there’s no single killer and more emphasis on Paxton’s escape and revenge. 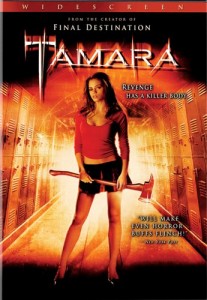 Geeky wiccan Tamara is the victim of a cruel prank by a group of popular kids that ends in her death – or does it? Back at school, after burying her, the guilty party are surprised to find that Tamara’s back as a sexy siren with psychic powers at her disposal – and she’ll do anything for the love of her sympathetic English teacher.

After this I Know What You Did Last Summer-lite beginning, we expect the new foxy Tamara to start offing the other teens. However, Tamara doesn’t kill all of those who ‘killed’ her, she makes them insane, suicidal or homicidal puppets who do her bidding for her and finally corners the object of her desire and nice girl Chloe, who manage to defeat her.

Why it’s not a slasher flick really: hardly anybody is murdered, which is a waste when you’re dealing with asshole jocks and nasty cheerleaders…

Victor: Hostel is the best non-slasher film here. See it if you can deal with all manner of torture devices being used and an eyeball being cut loose.

tagged with Face off, sequel city, what the hell!?