May Meet: The films I couldn’t finish

Those who know me well will vouch for my high tolerance of crap. Crap music, crap TV and crap films. But every now and then there’s that straw that breaks the camel’s back.

Here are five films I couldn’t deal with. I may have fast-forwarded to the end but the whole experience was out of the window for one reason or another… 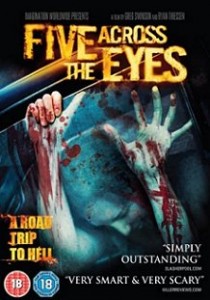 A quintet of high school girls go to a sports event at a school…. theirs, someone else’s, I really didn’t care. On the way back, she who is driving their mini-van knocks into another  vehicle at a bar and they unwisely flee the scene.

By this point, the camcorderiness of it all was becoming too much for me to take and thumb circled the fast-forward button like a vulture eyeing a carcass.

The driver of the other car chases and catches them and turns out to be a thirtysomething woman who’s evidently got the decorators in as she holds them at gunpoint, makes them strip and let’s them leave, only to chase them again, probably to kill them, I don’t know, it was well into x4 territory now.

A girl craps in her own hand and tosses it at the trailing car, nobody gets murdered and eventually the five girls gang up and kill the psycho bitch. What are The Eyes, you ask? It’s the name of the back country where this all takes place. Yay, relevance. Fucking dreadful. 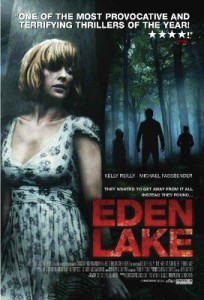 Here’s an oddity, a film which was quite obviously good enough but I made one of my rare sensible decisions to stop watching.

A city couple head off camping for the weekend and cross paths with some horrible teenage scrotes who begin a campaign of terror against the outlanders after they accidentally kill their dog.

I reached the point where it looked like I was going to get very angry with it – before the dog-o-cide – as I do about the subject of the don’t-give-a-fuck teenagers in society and opted to have a quick peek at the end, which only served to prove that it had in fact been a good idea to discontinue.

Yeah, so it’s “real” horror or whatever, but people call Radiohead “real” music and I don’t listen to that either. I want a Belinda Carlisle level of horror: big hair, strong predictable melody and commercial appeal, not downbeat state-of-society stuff. Film is supposed to help me escape all that BS, not take me on a trip back to it for entertainment’s sake. 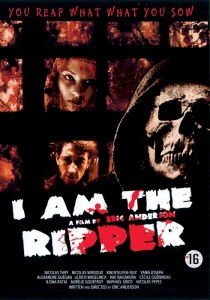 I only have hazy memories of what can only be a described as a French student project filmed on a Nokia.

At a Paris party, a skull masked killer turns up and kills a load of people. Okay, fine – this occupies about 15 minutes worth. Then they all come back to life (I think) and it becomes some bizarro Matrix-horror film with super powers or something? I don’t even remember.

But it was shit in its purest, distilled form. 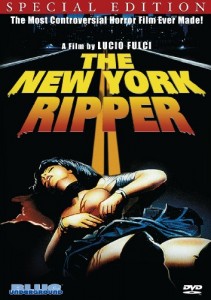 Just how this film has a 6.1 rating on IMDb is beyond my understanding. It’s SHIT!!!

The New York Ripper has garnered a reputation for hefty misogyny, which was fairly common in early 80s horror. Yes, it’s there but I expected that.

What I didn’t expect was how boring it would be. Fulci made the film look relatively professional, the murders are drippy and gross and very brutal but so little else happens. The gap between slayings grew as my patience shrank until I could take it no more and scurried to the end to see who the killer turned out to be and what the deal with the mad quacking was.

I actually had to watch the end twice to try and get it straight – some girl in a hospital bed with no arms or something. Zzzzz. 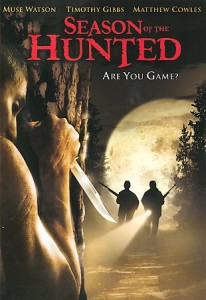 Muse Watson is in this. The Fisherman from I Know What You Did Last Summer wouldn’t lower himself to a camcorder tripe-fest would he? He was in Prison Break, damn it.

It turns out that yes, he would. He needs money too, y’know.

In this tale of some hunters becoming the hunted, I made it about twenty odd minutes in before x4-ville took over and I realized that this over-long film was not going to gauge my interest. Ever.

I can’t tell you what happened later in it but it wasn’t the slasher film the box art made it out to be.

There, see? Vegan Voorhees can’t promise to give you a fair rundown of everything because sometimes it’s just too damn shite to make it through. It becomes the unscratchable itch. Turn it off! Turn it the hell off now!

To this end there can be no real winner or loser this month; four of these films are irredeemably crap and the other is likely to induce a killing spree of my own. It being the odd one out, let’s pretend Eden Lake is the only good one.

tagged with gore o'clock, I want to die, me me me!, Nu-di-ty, spoilers, who finances this crap!?