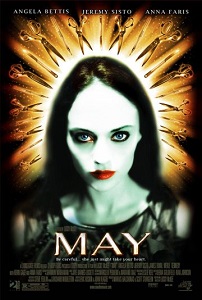 “If you can’t find a friend…make one.”

Laughter Lines: “When I left for vacation, my dog had four legs. When I came back… now… she only has three.”

With her lazy eye and pirate-style eyepatch, little May has no friends, so her mother’s advice at her empty birthday party – “If you can’t find a friend – make one!” – comes with a handmade doll named Susie, who permanently resides in a glass case, to be May’s best friend.

Grown up May works in a veterinary surgery and catches the attention of amateur horror film creator Adam (Sisto), who “likes weird”. But when May becomes a bit too weird for his liking, he avoids her like the plague, leaving her open to the affections of her dippy gay co-worker Polly (the always fun Faris), who donates her beloved cat to May for company. When Polly’s interest is refocused on another girl and May accidentally kills the cat, things begin to crumble and eventually splatter to rock bottom when Susie the doll is pulled to pieces by a bunch of blind kids she volunteers with.

Sadder than ever, May ends up walking around her apartment, petting the dead cat and smoking Adam’s cigarettes and tries to attract a new friend, who she ends up killing when he discovers the dead cat in the freezer and calls her a freak. Snared by the idea of literally making a new friend to replace Susie, she visits Polly on Halloween to collect her ‘beautiful neck’, the legs from Polly’s new girlfriend, and finally Adam’s ‘perfect hands’. 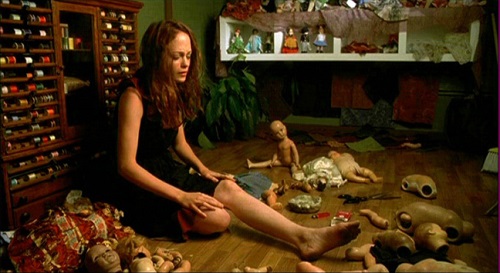 Bettis had recently played Carrie in the TV adaptation of the Stephen King book and extends upon the nuances of that character here, a girl similarly emotionally isolated. We generally feel for May as she drifts from her happy childhood into an entirely confounding adulthood; Her joy at receiving corrective contact lenses is sweet; Her heartbreak when she overhears Adam and his friends calling her a lunatic.

McKee hits the right notes, making her more human and sociable the more insane she becomes to the point of her premeditated scalpel murders, dissections, and sewing-together of her friend – who she affectionately names Amy. May echoes the sleazy gorefest that is Pieces only insofar as the killer creates a companion, but for entirely different reasons, making it the best Frankensteiny slasher to date.

Blurbs-of-interest: Bettis was later in Scar and the Toolbox Murders remake; Jeremy Sisto was in Wrong Turn; Anna Faris was in Scary Movie and Lovers Lane; James Duval was in The Clown at Midnight and Cornered!; Kevin Gage was in Laid to Rest.

tagged with before they were famous, slasher, spoilers