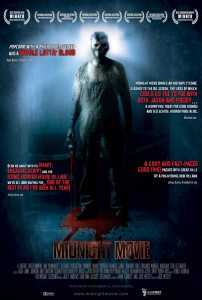 “The new face of horror.”

Dire-logue: “They say scary movies are an aphrodisiac…” / “If you get turned on by this, we’re breaking up!”

A patient in a psyche ward is sat in a room and permitted to watch the movie he is obsessed with. Some scary shit happens and later a doctor returns to find the entire place empty, blood everywhere but not a sign of anyone – alive or otherwise.

Five years later, the same movie, an old black and white Texas Chainsaw type called The Dark Beneath, is being shown at a dumpy small town cinema, attracting a handful of teens, a biker couple and the detective who was baffled by the hospital case and thinks the movie, which was directed by and starred the mental patient, “holds the key…”

In a similar play to Cut, once the reels are played, the killer in the film has the power to jump into the real world, kill a victim (which is shown on the screen as part of the film to the naive audience) with his sharpened coil-cone thingy, and drag them back into his celluloid realm.

The audience soon become wise to something weird and find themselves trapped in the cinema, they assume as part of the film, and try to avoid the teleporting killer, who looks a bit like Leslie Vernon crossed with Babyface from The Hills Run Red, with which it also shares a few story elements. 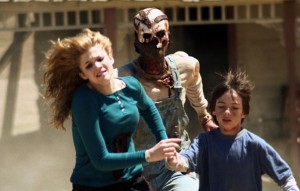 As low budget as it is, Midnight Movie is quite a fun hour and sixteen minutes, thus never outstaying its welcome, it reminded me of the early 90s late-bloomers Dr Giggles and, naturally, Popcorn, where they attempted to make light of the circumstances to some degree. There’s more seriousness on display here, though it feels out of place and the final girl (Brandes) seems to be in a different league to her doomed pals.

Bloodletting is secondary although when one person states that “you’ll have to go through me first!” – the killer takes it literally and duly does so. The outcome is that it’s a watchable one-off you’ll most likely forget about after a couple of days and the sequel-hungry ending probably won’t give birth to a new horror icon anytime soon.

Blurbs-of-interest: Jon Briddell was in stripper-slasher flick Hatchetman; the concessions-stand girl was Brea Grant, who was in Halloween II (2009) and TV’s Heroes.

tagged with get your own ideas!, Nu-di-ty, slasher