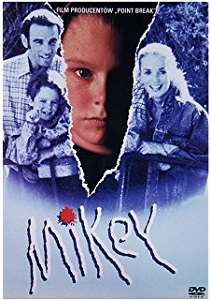 “Remember – Jason and Freddy were kids once, too.”

Laughter Lines: “Psychotic? So now we have Ted Bundy Jr., is that it?”

I love this artwork, total Hand That Rocks the Cradle weave-snatcher.

Mikey holds the moderately interesting status of being one of very few films still banned in the UK. That is to say, it was originally rejected in 1993 due to a case of two ten-year-old boys abducting and murdering a toddler and simply never resubmitted for release.

It matters not, seen The Stepfather and any of the early-90s psycho nanny/neighbour/roommate flick and you’ve seen Mikey, which has the unremarkable caveat of the loony toon being a nine-year-old serial adoptee. I’ll say it early, The Good Son did it way better.

The Stepfather seems to provide the template here, as things begin with Mikey, dissatisfied with his family’s attitude towards discipline, drowns his little sister, electrocutes mom in the tub, and sets up a Home Alone stunt to send dad through a glass window before finishing him off with a baseball bat. He then hides in the closet and turns on the tears when the cops come. 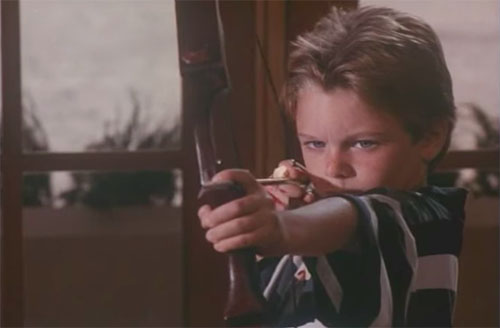 Mikey is re-adopted by Neil and Rachel Trenton in Arizona, enrolled in school, and develops a crush on his classmate/neighbour’s big sister, Jessie.

The first adult to suspect all isn’t right is his teacher, Miss Gilder, who takes his violent drawings to the principal, catches him in several lies and concludes he’s a sociopath in about four minutes.

Mikey frames Jessie’s boyfriend for the death of their cat and when she takes him back, he repeats the electrocution gag, prompting Miss Gilder to crowbar her way past the closed adoption to find out just where the little shit came from.

Outed as a maniac in the making, Mikey does away with the adults who pose a threat and somehow manages to set up a Happy Birthday to Me-esque tableau of three corpses around a dinner table. A tiny nine-year-old was able to drag, lift, and pose three corpses more than twice his size and weight. OK. Bet dad regrets teaching him archery. 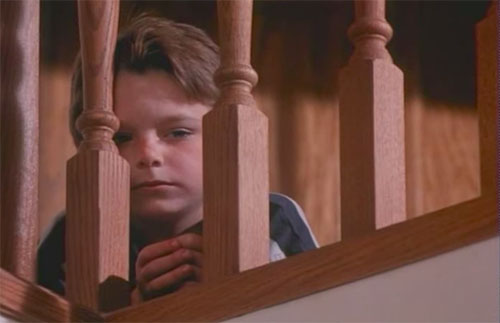 As soon as the film began I knew how it would end, with the requisite HE’S STILL OUT THERE!!!! scene where a couple of new schmucks adopt the ‘amnesia-suffering child found wandering the highway’. So Hollywood shouldn’t revel in the death of a kid on screen, but c’mon, we had to grow tired of Macaulay Culkin and that Xerox from Problem Child, just shove the little fucker down a well.

Too derivative to be anything more than a passing interest, but at least Bonsall does well in the title role, equal parts manipulatively convincing and unhinged, even if the post-slasher dialogue is too hammy to pack a punch: “What’s your favourite movie?” / “Freddy Krueger, Nightmare on Elm Street.”

Blurbs-of-interest: Bonsall was famous for playing the youngest child in Family Ties, and going from infant to age five over one summer; Josie Bissett was in All-American Murder; Ashley Laurance was the final girl in several of the Hellraiser movies; Whitby Hertford played Alice’s son in A Nightmare on Elm Street 5 and was the kid Sam Neill yells at in Jurassic Park; Mimi Craven – Wes’s daughter – played a nurse in the original Elm Street; the late Mark Venturini was the angry dude who axed up Joey in Friday the 13th Part V.

tagged with children are evil, get your own ideas!, Nu-di-ty, slasher, spoilers, yo! Hollywood