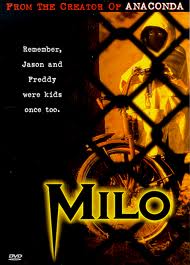 “Remember, Jason and Freddy were kids once too.”

A Sunday-afternoon video rental from the late 90s… The intervening years have jaded the memory of evil-child flick Milo. Mercifully, I should think. I definitely remember it being crap.

Sixteen years earlier a girl is murdered by Milo, a strange kid who wears a yellow rainmack all year round and rides a rusty old bicycle. He later drowns. Or does he?

In the present, three grown up friends of the murdered girl gather back in town for the wedding of a fourth. Only she has just died in a car accident. The heroine, Claire, takes over her dead friend’s job as teacher at a local school and soon finds herself haunted by visions of Milo. Thus, she convinces herself he is apparently still alive, apparently still ten years old, and apparently killing the other women.

Of course, nobody in horror films ever listens and she eventually ends up fighting off the little fucker on her own after all these neigh-sayers have been laid to waste. What are the facts? It’s all got something to do with abortion and children that don’t grow.

Milo is poorly written and produced and the end is a total mindfuck: A young janitor scrubs Milo’s name off a wall and in the next (and last) shot, we see the boy stabbing an unidentified woman who only takes up about a tenth of the screen space. From behind. Rubbish.

Creepy kids dressed in rainmacks should be creepy, but it’s all so amateurishly put together that you’d just kick Milo in the face should you encounter him.

Blurbs-of-shame: Walter Olkewicz was also in The Surgeon; the late Vincent Schiavelli turns up in all manner of films and was also in Playroom.

tagged with children are evil, death on campus, weird-ass twist, what the hell!?, who finances this crap!?