Remember where you came from 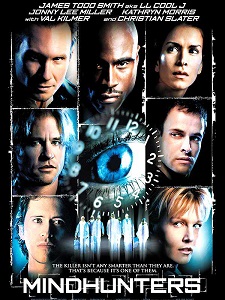 “For seven elite profilers, finding a serial killer is a process of elimination. Their own.”

Laughter Lines: “Eeny-meeny-miney-mo – who’s the next motherfucker to go?”

Spoilers follow. Senior FBI bod Kilmer wants to sharpen the profiling techniques of a group of his charges, so flies them off to an abandoned island used for military manoeuvres for a weekend, where he has plotted a few tests for them. However, one of their number believes they are a lot smarter than the rest and begins doing them all in with a series of elaborate traps at pre-determined times throughout the day. Can the depleting numbers overcome their paranoia and put their skills to the ultimate test before they become the next casualty?

This comparably high-tech outing thinks way about its station and aspires to rival the likes of Se7en and Kiss the Girls, but cannot escape the trashier prerequisites the stalk n’ slash plot commands in order to sustain itself. Extol the calibre of the cast all you like, but Slater, Kilmer, Miller and the rest are still saddled with rather basic characters, especially Morris’ uninteresting 2D heroine, and the fact they fail to realise they’re in a slasher flick. Thus, it was quite a catastrophic box office failure, failing even to break even.

Despite this notion of thinking it’s better than it is, Mindhunters at least feels like it has a fresh perspective in the days before Saw and its squillion sequels and rip-offs, with over indulgent murder set pieces, talky techno-babble, and the fact that it all collapses into PC-pacifying outcome where we’re forced to choose between the only black guy or the only British guy being the killer. Who d’you think it’s going to be? Mhmm.

Worth a once over.

tagged with accents from hell, get your own ideas!, obvious identity of killer, slasher, spoilers, star power, yo! Hollywood