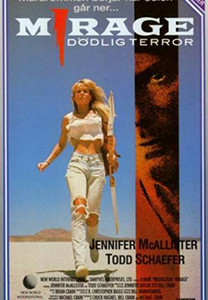 Mirage begins with a classic American red pickup speeding driverless through the desert, a box holding down the gas pedal, while two blonde teens disrobe and have sex in the back. Their fooling around is watched by the occupant of a modern black 4×4, who then torments a second couple driving in the same area.

Both couples convene and a third come by on a motorcycle: Brothers Greg and Kyle are kinda fighting for the love of Chris, one of them having hired his companion to pose as his dim-witted new girlfriend to try and make Chris jealous. It fails.

They toss a football, flash boobs, discuss metaphysics (!), and the black truck. Kyle and his pretend-girlfriend leave and she goes off home safely, while he decides to ride around on his bike for a bit.

Before long, the black truck returns to reap chaos, first leaving notes that say “You are all going to die,” and then kidnapping one of the boys and burying him up to his neck before leaving a grenade next to his head. Another girl is found with her throat violently cut, leaving the two remaining teens to traipse across the desert all day, all the time stalked by the truck and its mysterious off-camera driver.

Eventually it’s down to Chris and the killer, whose face is finally revealed and just happens to be a desert-cruising psycho, sort of a California proto-Mick Taylor, and played by B.G. Steers. Whether or not this is Burr Steers of Intruder fame I cannot discern: They look and sound quite alike, but the low picture quality of the copy I watched has cloaked this in mystery. 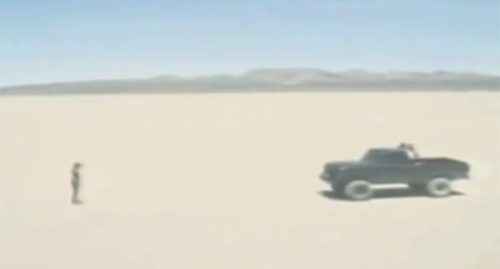 Mirage is a bit of a drag given there are only seven people in the whole thing, with very long shots of nothing happening. The minimalistic desert setting lends itself to both low-budget filmmaking and a grim sense of agoraphobia, but it would work far better as a 45-minute short. As it is, the pace is way too sluggish to keep you on edge and the allusions to Duel too infrequent to be rousing.

But, it’s a bloody little affair that doesn’t hold back on flashing the gruesome denouements – and for all those people who complain the genre is misogynistic, the sole female victim is killed entirely off-camera – so at least there’s that. So-so.