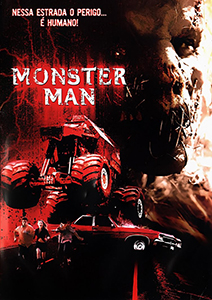 Laughter Lines: “‘A fucking virgin’? Isn’t that an oxymoron?”

College buds Adam (Jungmann) and Harley (Urich) are driving to the wedding of a girl who it turns out they are both in love with. Both also plan to pledge their love for her.

After pissing off some locals, they find themselves stalked by the malformed, stitched-up, driver of a monster truck who has a thing for stealing the limbs of local rednecks, and drag sexy hitcher Brooks into the nightmare.

This annoying Jeepers Creepers wannabe starts off earnestly enough, with some good comic turns from the appealing Jungmann, but the constant frat-boy humour soon becomes an itch you cannot scratch. Right up the ass. This rectal discomfort is further compounded like a sledgehammer sending a wooden stake further up said arse with a body count that never kicks in effectively.

The third act is predictably resolved to end on the happiest note possibly contrived from what little charm there is, but when a film can’t decide whether it wants to rival a decent horror pic of circumnavigate virginity jokes and become just another American Pie knock-off, there’s very little left to recommend.

Blurbs-of-interest: Jungmann had a small role in Drive In; Michael Bailey Smith was in Chain Letter; Aimee Brooks played one of the ghost children in Sorority House Massacre; Urich crops up in lots of low-rent horror films, including Horror 101.

tagged with get your own ideas!, gore o'clock, rip-off central, slasher, who finances this crap!?