Another handful of horrors that hang out by the dance floor where all the slasher flicks are partying and flirt with them, trying to blend even though they don’t really fit in… See the last lot here. “From the makers of Saw” came this seriously underrated and unsuccessful scare flick, in which young couple Ryan Kwanten (later in True Blood) and Laura Regan (from My Little Eye) receive a creepy ventriloquist’s doll in the mail that somehow kills her, sending him back to their hometown of Raven’s Faire, a town apparently cursed by the ghost of Mary Shaw, subject of an Elm Street-like nursery rhyme that states if you encounter her in your dreams, don’t scream or you’ll lose your tongue, just as Regan did.

Kwanten’s investigations, hampered by greasy detective – and ex-New Kid on the Block – Donnie Wahlberg, seem to generate a fresh wave of creepy deaths and there’s one helluva twist at the end that I was totally blind to!

Why it’s not a slasher flick really: it’s a ghost story with a body count really, shades of Darkness Falls as well as Krueger-town (there was an additional murder in the deleted scenes) creep in, but not enough to swap sub-genres and they’re not likely to make a sequel… Three northern gals holidaying in Mallorca hook up with a quartet of private school guys crewing on a luxury yacht and decide to party on the boat. Sex and drugs dominate and one of the guys decides to test a sexual urban legend – the Donkey Punch – which backfires, killing one of the girls. The boys vote to throw her overboard and say she fell and when the girls refuse to go along with it, a series of intensified confronations and misunderstandings lead to a second accidental death, then escalate to murder…

Why it’s not a slasher flick really: most of the deaths are accidents (including a neat outboard demise) and one person commits suicide. There’s a final girl of sorts but this is totally a Brit-grit situation flick. 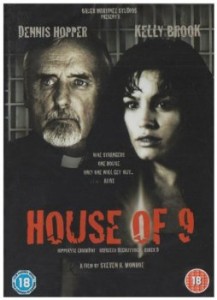 Another UK export; in this cut-price Battle Royale, nine strangers are abducted and wake up in a locked down house and informed that when only one remains alive, they will exit with £5million. Dennis Hopper is an Irish priest with a dodgy accent, Kelly Brook a shy dancer, Chardonnay from Footballer’s Wives a socialite, a rapper, an American detective, married couple and so on…

They argue about the situation until it leads to accidental death and murder, whittling down numbers until only one remains and exits. Cue semi-clever twist.

Why it’s not a slasher flick really: as with Donkey Punch, it’s all situational, there’s no one killer offing everybody one by one. I love this cheesecake 80s horror film about a killer genie – or Djinn – which inhabits ye olde lamp that dim-witted, dungaree-wearing heroine Alex rubs when it arrives at her father’s museum. A field trip, a dumb teen idea to spend the night there (in a fucking museum…), Djinn-possession and the teens, some staff members and a couple of meathead racists find themselves done in in a variety of proto-Final Destination ways, some of which are suitably gruesome and clever, let down only by bargain basement effects work and a Djinn that looks like a Kinder Egg toy.

Why it’s not a slasher flick really: it’s a close one: there’s a lot in common with the likes of The Initiation and any number of collegiate prank slasher flicks but in the end it varies itself out of the equation. A defence psychologist appointed to reassess a murderer, who proceeds to fill her in on his traumatic childhood and the slayings that followed. Despite warnings from the creepy institution doctor the shrink is soon sucked into his tragic tale of a nasty mother, school bullies and his one friend. All the blood on show is like black motor oil from a bunch of extras who are slashed up with a straight razor. Things go all Se7en with a downbeat twist ending, but it’s typically arty in the Australasian way.

Why it’s not a slasher flick really: a serial killer flick with grisly murders peppered throughout; no busloads of dense teenangers here.

tagged with accents from hell, get your own ideas!, gore o'clock, Nu-di-ty, Rule Brittania!, spooky, the 80s, weird-ass twist