Would you believe that quite a lot of slasher films suck? No, me either. I expect brilliance in everything. But as before, some slasher films have failed me. Failed miserably. And thus, they don’t warrant any more of my ludicrously precious time than they’ve already sucked away with their suckiness. Sucks to them! 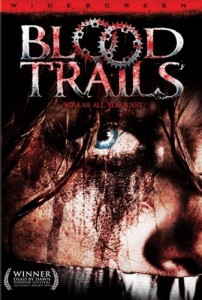 Moody bicycle courier Anne is approached by her estranged ex, Michael, and agrees to get out of the city for some fresh air after a particularly bizarre sexual encounter with unhinged traffic cop, Chris.

Now, if you were a fisherman by trade, would you go on a fishing holiday? No. Still, Anne being a bit of a simpleton, she and Michael decide to go mountain biking deep in the woods. Guess who shows up and manages to cut Michael’s throat with a bike tyre via a nifty Matrix-style in-air skid?

After this development, about twenty minutes in, the rest of Blood Trails consists of Anne pedalling away; Anne sitting on rocks; Anne crouching behind trees on lookout… Everything takes forever to unfold, supposedly in the name of tension building but, if anything, if there was ever an excuse to fast forward, this was it.

At one point, Anne comes across two forest workers, neither of whom utter a single word despite the obvious fact that the woman is traumatized and that the tree they were sawing down fell on her! It matters not, as Chris soon floats in and kills them.

Minimal interest kicks in as Anne attempts to escape but it all goes out the window with a stupid finale in which the unarmed killer manages to shoot two cops who turn up out of the blue for no reason.

It looks like helmer/scribbler Krause was trying to create a ‘true’ survivalist horror but the film spends too much time with an unsympathetic simpleton of a heroine who makes some of the most ridiculous decisions in slasher movie history, i.e. you have a car at your disposal, which you could run down the killer with but instead get out and cycle away. Says it all. 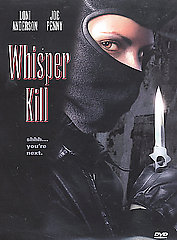 A.k.a. A Whisper Kills

It’s great that this made-for-cable “mystery” doesn’t give away the killer’s identity on the DVD box, isn’t it? Oh look, it’s obviously a female in a film with only two female characters.

Bad-movie-fixture Loni Anderson is the owner-slash-editor of newspaper in the small town where a ski-masked fiend is first making murmured phone calls to the people who later get stabbed.

Commits the unforgivable sin of being boring as well as crap. 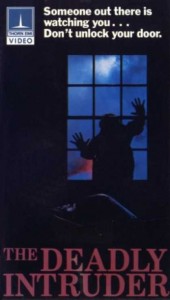 “Someone out there is watching you… Don’t unlock your door.”

Dire-logue: “Cooking without garlic is like making love without foreplay.”

Another escapee from an asylum arrives in another small town (Midvale, pop. 18,000) and begins laying the locals to waste. This truly horrible film has the audacity to declare itself “in the Hitchcock tradition” on the back of the box but could not be further from Hitch’s style if it boarded a rocket to Jupiter. And I wish it had.

Things kick off in a fairly pacey Friday the 13th way with seven murders in the first 35 minutes before the rot begins to set in. The rest of the plotless plot centres around screechy heroine Jessie, who throws a party for some friends (two of whom never make it) where she is introduced to Bob, a magazine writer from Canada working in a local clothes store to “get the working man’s perspective.”

And while nobody but Jessie and friends believe him, there’s a homeless drifter loitering outside the windows, wandering aimlessly with a sickle, looking like a psychotic Paul McCartney. Said hobo abducts Jessie that night and ties her up in a shack about 30 feet away from her house!

A good third of the film is taken up by this senselessness that never goes anywhere as we decide who is now more likely to be the killer: Wino McCartney or Bob? The outcome is anything but a surprise and the obnoxious twist that somehow anticipates the sequel-that-never-was is the only scary thing that happens in The Deadly Intruder.

There is no merit to this film with the possible exception of seeing Danny Bonaduce of The Partridge Family murdered with prejudice. Add this to the ghastly repetitive synth score and it hurts like fingernails down the chalkboard OF MY SOUL! 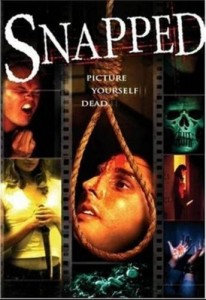 Dire-logue: “So, you’re solution to my dilemma being ‘all men are dicks so stick yours in me’?”

I like weird things: cold toast with Vegemite, sideburns, Dr Pepper and Eurovision. Snapped is a weird film, really weird. But I didn’t like it. Sorry, Snapped and all ye affiliated with you.

Tiffany Knight is the curiously named Amy Mechanic, a struggling photographer who lands a well-paid new job for a mystery client. Without any credible explanation, Amy begins bludgeoning and hacking up bystanders in her life and taking pictures of the bodies to win the praise of oddball gallery rep Virgo.

Much of the build up to her ‘snapping’ (get it?) concerns the split from her junkie painter boyfriend and moving into the basement of bitchy best friend, Rose, whose own boyfriend is getting visits from an ass-kicking female loan shark. None of these things are of much importance, merely devices to bring more pitiless victims into Amy’s path.

Like so many post-millennial slashers, Snapped suffers from an overabundance of assholey characters we don’t care about, rather than nice folk battling for survival, rendering it the kind of picture you shouldn’t stop to gaze upon, let alone attempt to figure out the ridiculous twist ending, which makes even less sense! 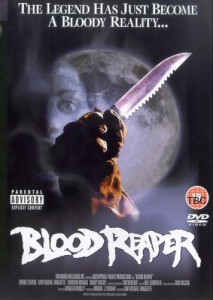 “The legend has just become a bloody reality…”

As if the barrel-scraping of Camp Blood and its shoddy sequel was actually a challenge to other filmmakers, here’s another shot-on-video campers-in-peril quickie with equally abysmal results.

More youngsters ignore warnings of a mythical killer living in the woods blah, blah, blah. They go camping anyway, blah, blah, blah. Even Brinke Stevens – who gets top billing for her seven minute cameo – looks glazed with disappointment that it’s come to this.

Long, boring sequences of individuals milling silently amongst trees while the camera bobs behind branches pad out the eighty minutes, while the audience pleads for someone to put us out of our misery. There’s an almost eye-opening innovation of electing the chubby girl as the heroine but, alas, they make it not so and kill her with a sharp log.

The intermittent gory murders are sloppy and unrealistic, reproducing everything we’ve seen elsewhere in better films and they even try to recreate the famous Ki-ki-ki ma-ma-ma sound of Jason and toss in a plinky-plonky Halloween-style theme to lighten proceedings but all it does it remind us that Blood Reaper will never live up to those standards.

tagged with accents from hell, Euro-horror, Friday the 13th, get your own ideas!, Halloween, I love Jason, Nu-di-ty, obvious identity of killer, slasher, spoilers, the 80s, TV, weird-ass twist, what the hell!?, who finances this crap!?