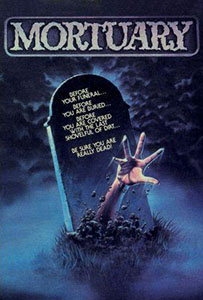 “Before they bury you… make sure you’re really dead!”

Although the script virtually staples a neon sign on the forehead of the killer from the first time they appear, Mortuary is still quite a fun little flick. At worst it’s largely incoherent to the apparent recent history.

McDonough (another Little House On the Prairie refugee alongside Melissa Sue Anderson of Happy Birthday to Me) is a girl, Christie, who is convinced her father was murdered despite all evidence leaning towards an accidental end (we know better, natch) and when her boyfriend informs her that he witnessed her mother taking part in some weird séance, she starts to get jittery and the black-cloaked psycho cropping up at every turn wielding embalming tools isn’t helping much either…

Cue lots of Scooby Doo-styled investigations by the kids that point towards the answers in the town mortuary, owned by séance-leader Chris George. Nothing is less surprising when we find out who the killer is in the first hour, even their motive is spelled out simplistically enough for a five-year-old to guess, but it’s still a good laugh.

The late Bill Paxton (wah!!) is the school geek with a crush on Christie and the mortuary owner’s son mourning his mother’s recent suicide. The low body count is a bit of a bummer, especially as Christie’s three other teen friends who turn up at the roller rink (weren’t the eighties great?) could have easily ventured off to the mortuary to help with the detective work and been ‘embalmed’ as well, but the film is still offbeat enough to provide a 90 minute distraction.

Blurbs-of-interest: Paxton was the bully who got milk poured over his head in Night Warning, was also in Deadly Lessons and, much later, Club Dead; Christopher George was also in Graduation Day and Pieces (along with wife Lynda); David Wallace was in Humongous.

tagged with before they were famous, slasher, slasher films that aren't supposed to be funny but are funny, star power, the 80s