Most likely not to die. Despite requirement to. 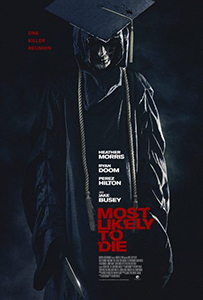 MOST LIKELY TO DIE

Laughter Lines: “Oh please, like this Cabin in the Woods shit really happens!”

There’s yet to be a slasher film at a proper reunion. You know, scores of attendees back at their old school or a hotel, a DJ, stupid ‘most improved’ prizes – and a killer on the loose. Spoilers ensue.

Instead, virtually everything seems to pivot on a small group of wrongdoers lured to a cabin/house/dilapidated schoolhouse where they’re assembled to pay for some dreadful past sin.

Most Likely to Die is not a departure from this cheap tried and tested method – but nearly is. Set entirely at a house in the hills on the Californian coast, nine old high school pals gather to prep for the proper reunion the next night. Where are their hosts? Were they murdered at the beginning?

Our girl to watch is professional poker player Gaby, ex-girlfriend of TV star Brad, who has brought along his supermodel girlfriend, Bella. On the wall, nine yearbook photos with their ‘most likely to…’ tag beneath: ‘Get what she wants’, ‘eat anything’, ‘see their name in lights’ etc., all of which will come true in the most gruesome of ways. 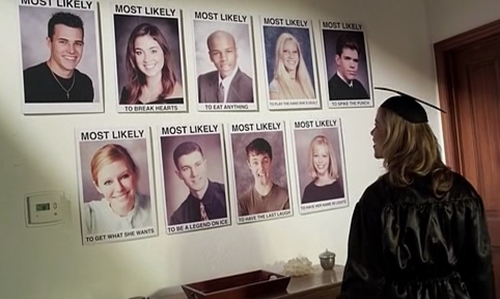 Seems as if they were all party to a nasty prank on high school loser John Dougherty, who later brought a gun to school and was packed off to juvie hall.

Now, somebody dressed in a blue graduation gown, complete with razor-edged mortar board, is stalking the house, doing them in as per their quote. Well, some of them. The body count stays disappointingly low. Note to producers: IF YOU’RE GOING TO CAST PEREZ HILTON IN A SLASHER FILM, MAKE SURE HE’S DEAD BY THE TIME THE CREDITS ROLL.

Yeah, that’s right – the maligned spreader of mean gossip is spared a slashtastic death. I’m relatively indifferent to the man, I saw him acting like a dick on Celebrity Big Brother a few years ago, but that’s where my exposure to him pretty much begins and ends. The fact that he’s a despised limelighter should mean that his inclusion in a body count horror film would capitalise on the opportunity, much like almost-namesake Paris Hilton was done away with in House of Wax. Fatal error. Or rather, not fatal enough. 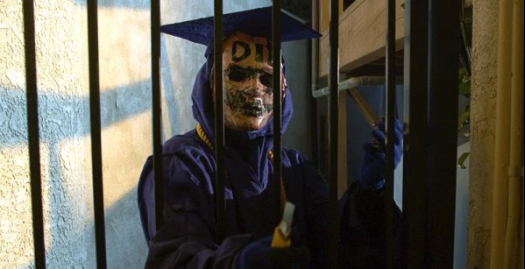 Nevertheless, there’s enough to enjoy here for a once-over: Above average production attributes, with some nice shots, Morris is good as the heroine, and there’s a decent scene where she’s stuck down a gated alleyway, locked one end, not at the other. Guess where the killer is.

The outcome of the mystery isn’t surprising so much as it elicits a ‘meh’ of a revelation, and way too many of the characters survive, though notably all females who aren’t the heroine are laid to waste. Hmm…

Blurbs-of-interest: Jake Busey was in Identity; Ryan Doom was in Circle.