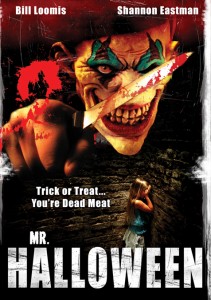 Dire-logue: “Why does everybody in this goddamn town gotta tell me my goddamn job? Got no goddamn respect!”

Teens in the New York township of Sauquoit have a tendency to disappear at an alarming rate around All Hallows Eve. When Jill’s friends Jason and Michael (ha-bloody-ha) vanish, she wonders why. And it takes her a full year to investigate the annual haunted house attraction of local oddball Mr Loomis, whose barn-bodyparts look a tad on the realistic side…

Jill and her replacement friend, Village People member-lite Jack (ha-bloody-ha again), snoop and she ends up getting kidnapped by Loomis, who chains her in the cellar with Michael, who has been there for the last year awaiting a Halloween night execution for the revellers to gorp at. Can they escape? Will anyone help them? Why is this film nearly two hours long?

Another trip into the bargain basement of slasherdom, Mr Halloween is a film full of whys, such as:

OK, so the budget was like $29.95 and it was clearly just an ensemble of local friends having a laugh… Right? To be fair, the gore jobs aren’t that bad, but when my DVD player informed me that there was nearly two hours to sit through once I’d sussed just how low a budget this was, I considered reaching for a couple of nearby candles to burn my eyes out. The music isn’t too bad either, with synths that reminded me of Hell Night, but Mr Halloween is a film that really shouldn’t have gained international distribution, it’s not bad enough to be funny and outstays its welcome by approximately 111 minutes.

One curious note is that – in spite of some faces on the missing persons’ posters shown – there are no female victims whatsoever, not one. In fact, Jill is the only female character with more than two lines to utter. So that means no tits either, weird eh?

tagged with calendar carnage, I want to die, slasher, who finances this crap!?