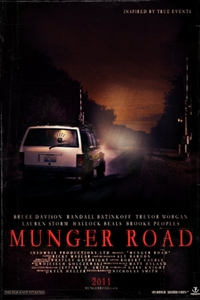 A.k.a. The Wrong Road

If you’ve ever been stuck in a car in a traffic jam, that feeling of hopeless tedium will sum up what watching Munger Road is like – a film so slow and plodding that a nineteen mile tailback would probably be more engaging. Major spoilers follow.

OK, so the budget was like $200,000, and Nick Smith has at least made a good looking film, but the story isn’t sufficient to fill out a 20-minute anthology segment, let alone an 81 minute feature. And we kinda already had this story in 2006’s Fingerprints.

Legend has it a busload of kids were killed when a train hit their school bus blah years ago, and if your car should come to a halt on the tracks, little ghostly handprints will appear and push you to safety. Uninteresting bro’s Corey and Scott want to catch this phenomenon on tape and sell it to some reality show, so talk girlfriends Rachel and Joe into going along with them.

Meanwhile, a serial killer who murdered six kids in the area has escaped and the local chief (Davison) and his deputy are looking for him before an influx of visitors for a carnival arrive. 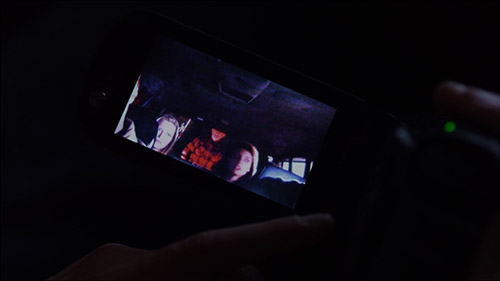 The teens conduct their experiment but then find the car powers out down the road, stranding them there, and there’s also no cell reception. Corey opts to hike back down the road to where they had signal and summon help. Scott, meanwhile, plays back their footage and sees that there was somebody stood behind the car when they drove away initially. Joe then goes to find Corey, Scott and Rachel stay in the car and are tormented by creepy occurrences.

Ultimately, anyone killed is done so entirely off camera. The cops finally reach the old farmhouse where Joe has ended up after being attacked and spared by the killer. They rescue her and get a call saying the escaped guy died the day before, Harry Warden-style. So who is it? Well, the film ends with a kick-in-the-balls ‘To be continued’. This was in 2011, seven years have passed and no sequel has appeared. Awesome.

Cumulatively, there are maybe 15-20 seconds of unsettling visuals here, the rest is a monumental waste of time. Mush together bits of My Bloody Valentine, Dead End, Wind Chill, Fingerprints, and The Gallows and this is the swill you’re left with.

tagged with after they were famous, get your own ideas!, spoilers, weird-ass twist, what the hell!?