An Ex to Grind 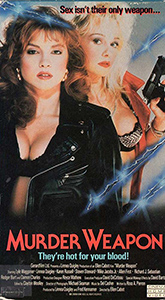 “Sex isn’t their only weapon…”

Laughter Lines: “Shit, I think I fucked him to death!”

Spoilers ensure. Beginning with a 10-minute dream sequence in which there is zero dialogue, Murder Weapon skips then to more extended scenes of sexy leads Quigley and Russell talking with asylum shrinks about ‘what happened’ to them. They’re then released and go back to their Beverly Hills lives as daughters of hitmen for the mob.

Pissed at the way they’ve been wronged by men for so long, the BFFs invite six ex-boyfriends over for a party. Beer flows, stories are shared, the girls hook up with some of the guys, tits, ass, shower scenes, murder.

The most notable aspect of Murder Weapon is that all of the victims are guys, a possible flip-reverse on DeCoteau’s part of the accepted conventions that low-end slasher films were all about punishment of bouncy young women. Or just a plot scribbled on the back of a beermat, who knows? It’s not like there’s a shortage of the other oft-criticised elements of skin, bad acting, stupid decision making…

It matters not. This is one for completists and the eagle eyed will see Eric Freeman, he of the infamous “Garbage Day!” from Silent Night, Deadly Night Part 2, as one of the exes, credited here as Damon Charles and still packing a whole hunk of muscle under his tight shirt.

Guys are sledgehammered, bottled, shot, and in one bizarre moment the killer’s hand pretty much pushes its way through the back of a dude’s neck and out of his throat and tosses innards into his gaping mouth! Listen out for the awesome dialogue: “We need to think of a password…” / “Uh… condom.”

If there’s a twist here, I wasn’t privy to it. Linnea is the killer – but her friend isn’t? Then why invite all the evil exes over in the first place?? How is Linnea able to teleport to under the bed, don a glove, to kill that schmuck??? It’s DeCoteau, nuff said.