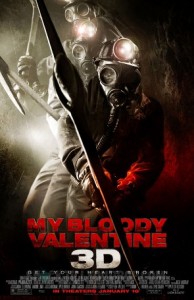 “Nothing says date movie like a 3D ride to hell!”

And so, Hollywood’s latest candidate for a rinse n’ makeover arrives. A bit of a cult classic, the original is reportedly Quentin Tarantino’s favourite slasher flick. Strangely, it’s about the only film he hasn’t ripped off yet…

As the plot of a masked-miner offing partying youngsters at his place of work wasn’t likely to pull ‘em in these days, those crazy folks at Lionsgate decided to make this a 3D experience! Cool, huh? There hasn’t been a theatrical 3D slasher flick since, oooh, Freddy’s Dead back in ’91? Wise decision in the current climate. Unwise was hiring Todd Farmer to scribe the thing. Now, while I’m sure Farmer is a nice chap (he plays the trucker FYI), he did write Jason X and the watered-down ghostfest that was The Messengers. His intentions might be good – play things back to their roots: gore, full-frontal nudity – but his script doesn’t make a whole lotta sense… 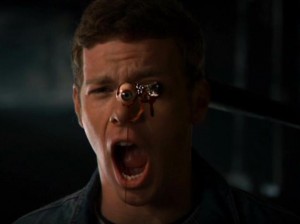 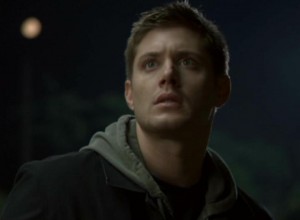 The walking oil-painting that is Jensen Ackles is Tom Hanniger (they kept some of the original names – yay!), who is apparently to blame for an accident at his pop’s mine that causes a cave-in and strands six of the men in the rubble. When they pull out the lone survivor, Harry Warden, they discover he slaughtered the other five in order to stay alive. Shortly after, Harry wakes from his coma and murders 22 people, finishing at the mine where a group of employees and their babes are partying.

Ten years later, Tom returns to town to finish up selling the mine and runs into his ex Sarah, now married to old buddy Axel, who is now the Sheriff and doing Sarah’s grocey store employee Megan ‘in secret’. Miner-murders quickly begin with an unfortunate nude lady and Farmer’s trucker, escalating to people associated with the mine. Victims are chiefly done in with a rusty old pick-axe, gorily most of the time and with sod-all sympathy from anyone. 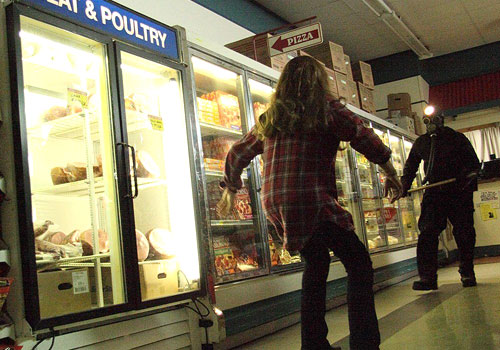 Unlike the original film, the slayings occur in town over a few days surrounding Valentine’s Day, victims’ hearts showing up in candy boxes again, with a subplot thrown in to explain what became of Harry Warden to ‘tie-up’ questions the audience may have. Eventually, all roads lead back to the closed-off section of the mine and the identity of the killer is shoddily revealed. It’s a disappointing revelation that shows the studio’s primary concern was for the 3D effects. I imagine somebody turned around and slapped their forehead, exclaiming: ‘Shit! We have no motive and those flashbacks do nothing to clear it up…and how did the killer know where _____’s _____ was if only _____ knew!?’ There’s nothing that makes you sit back and think ‘oh yeah, I should’ve noticed that!’ It’s completely out of leftfield, yanking the film’s shoelaces undone so that it trips over itself in the middle of a crowded supermarket.

This minor (har-de-har-har!) complaint aside, MBV ’09 is a fun romp with lots of grue and chases thrown in, even if half the audience did grown when character’s decided to run through the woods into a delapidated house rather than stay on the road and risk the possibility of flagging down help. But this is a slasher movie – common sense has no place here.

Slightly off-topic, why do killers always choose to return years after in multiples of five? Couldn’t it have been nine or eleven years for once, ay? 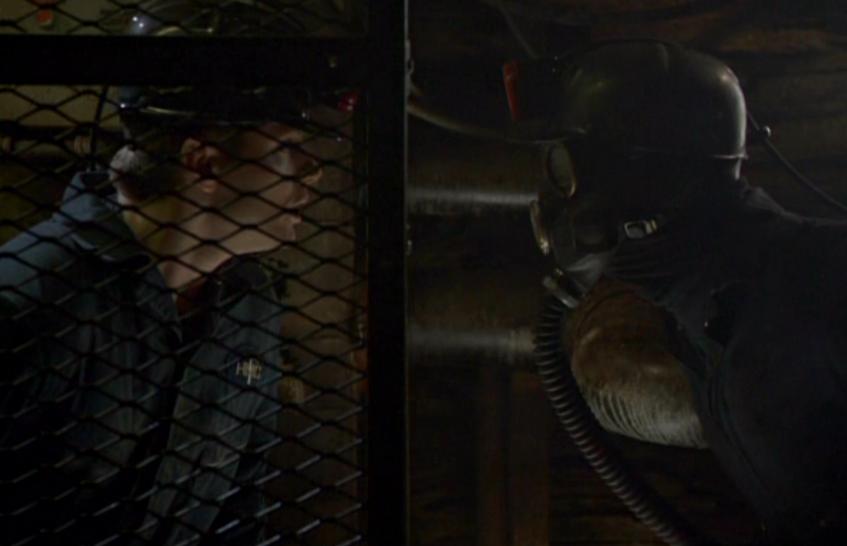 Blurbs-of-interest: Lussier and Farmer joined forces again for 2019’s Trick. Tom Atkins was in that and also Maniac Cop; Jaime King was also the heroine in The Tripper; Kerr Smith cheated death in the original Final Destination. But not for long… Betsy Rue turned up in Halloween II (2009) and Groupie.

tagged with calendar carnage, get your own ideas!, grrr men!, Nu-di-ty, remake, slasher, threee-deee, yo! Hollywood