…Something beginning with overrated 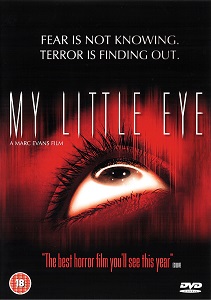 “Fear is not knowing. Terror is finding out.”

Trailers for My Little Eye looked awesome back in the early 00s, and I went to see it around the same time that the similarly-themed Halloween: Resurrection floated to the surface.

Kind of an awkward marriage between parts of The Blair Witch Project and Big Brother - then at the peak of its popularity – five young hopefuls are plonked in a house in the middle of nowhere (a nowhere covered by an inescapable blanket of snow) for six months with the promise of a million dollars each if none of them leave before it’s over.

As they near the end of their stay, the shady producers begin sending stranger and stranger supplies to the house, such as bricks, a gun, a hammer. that prompt the residents to try and delve deeper into the agenda, amped up when a hiker happens by and claims he’s never heard of the show.

They discover they are guinea pigs to a secret circle of sadistic millionaires who want to see live murders and one of them turns out to be a well-placed psycho who’s happy to start doing the rest of them in until whiney heroine Emma takes him on.

In synch with hordes of other it’s-real-no-it’s-not slashers including Kolobos and Voyeur.com, a large spoonful of the film is presented via obscure camera angles as the slow build keeps the audience waiting for that mind-blowing revelation… There are a couple of suitably eerie moments on route, but instead of a huge twist, things just peter out with an annoying and bleak twist ending that succeeds only in cementing the hour-long build up as a waste of time.

Biggest mystery: If the whole thing was just an elaborate trap, why wait six months before killing everyone on the same day?

Blurbs-of-interest: Laura Regan was in Hollow Man II; Kris Lemche was in Final Destination 3; Nick Mennell was in the Friday the 13th reboot; apparently Bradley Cooper did a few films nobody ever heard of.

tagged with before they were famous, get your own ideas!, slasher, weird-ass twist, who finances this crap!?