Bitchy Birthday To You 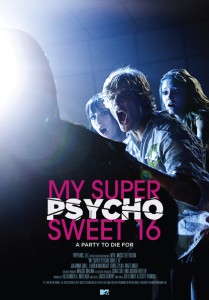 It’s time to throw the ultimate strop, complain that Daddy didn’t buy you anything you wanted, and maybe think that your friends don’t really like you at all…

So, as the MTV show My Super Sweet 16 goes (on the basis of the one episode I had the misfortune of seeing), we follow a fifteen-year-old girl as she prepares for her Sweet 16th. Now, in the UK you typically celebrate turning 18 or 21. There was nothing special about my sixteenth birthday or that of anybody I know. I certainly didn’t hire a giant venue, have a massive party with DJs, a PA and a cake that could feed a small African country. I was probably given a tambourine, some vulgar clothes, and spent the day thinking “nobody understands me!”

The show is renowned for highlighting everything that’s wrong with horrible teenage girls: they’re bitchy, moany and 100% ungrateful. So what sane person – or indeed person of regular means who could never contemplate having such an extravagant shindig (especially when you can’t legally drink) – wouldn’t enjoy seeing these nasty little snobs skewered by a pissed-off killer?

In the surprisingly well-produced and gory movie, Queen Bee high schooler Madison Penrose (Guill) elects to have her Sweet 16 at the Roller Dome where, ten years ago (as ever, not nine, not 11), a particularly obnoxious Bieber-resembling teen humiliates the resident Lord of the Rink, a knight-costumed employee who gives out cakes n’ stuff, and promptly gets a sword shoved through the back of his head. Serves the nasty little fucker right. The cops find a few more dismembered teenagers in barrels out back to boot.

A decade later, the killer’s daughter Skye (McKnight) who called the cops on him, is the outcast goth-lite chick in school. When she begins attracting the attention of Madison’s ex, Brigg (!), it comes with a side order of bitchy pranks from the trio of nasty girls who run the school.

“Brigg” continues to make a beeline for Skye’s attention and eventually she and her dorky horndog friend Derek decide to crash Madison’s party, after Skye battles for all of three-minutes the issue of returning to the scene of her supposedly-dead father’s crimes.

The party gets into swing, kids skate, make out, Madison bitches that the cake isn’t right and gets hit on by the party planner… and soon the psycho knight turns up and begins hacking, bludgeoning and decapitating the guest list until Skye, “Brigg” and Madison are left to face off with him, Prom Night style!

MTV may have a lot to answer for in its influence on youth film culture in general – A.D.D. stylings, kinetic editing and a signifcant lack of character, but MSPS16 at least seems to be aware of this and plays merrily with spoofing the show from which it draws inspiration and teen interplay in general, skewering it both figuratively and quite literally. 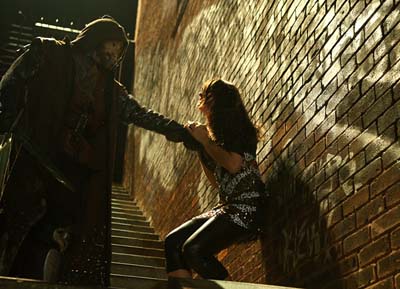 Additionally, the film is bloody enough to satisfy, doing all the things we hoped the drippy Prom Night remake had. Although given the plotting devices, the victims are predominantly nubile teenage girls who shriek and scramble in terror. A particularly memorable scene involves a girl – on skates – fleeing from the sight of her friend’s body, getting decapped as she goes, leaving her headless corpse to roll straight into a birthday cake!

There are a few good scenes, though they lean heavily on coincidence: One girl attempts to escape by finds herself stuck behind one of those gates that has spikes all around it to stop people swinging around the side to gain entry. It doesn’t stop her trying though. And once the mayhem is discovered and people flee, the ‘right’ characters are somehow left inside just long enough to be stuck there.

Blurb-of-interest: Julianna Guill was Bree in the Friday the 13th reboot; Matt Angel was in Mischief Night.