Some slasher movies go the Michael Myers route of the audience knowing who the killer is from the off, others opt for a classic cloak and dagger whodunit mystery. Sometimes, these are dead easy to suss out (*cough* Prom Night *cough*), sometimes friends or reviews inadvertently blah (cheers, Ian, for clueing me in on who was the Parka loon from Urban Legend), and sometimes they try to fool us.

Downgrade student Charlie Schlatter sees his uptown girlfriend burned alive and becomes the main suspect in a series of murders around campus. But who is doing it? In a twist I never saw coming, it is the ‘dead’ girlfriend, who burned up some poor other girl in order to operate off-radar. Even Christopher Walken didn’t figure that one out. 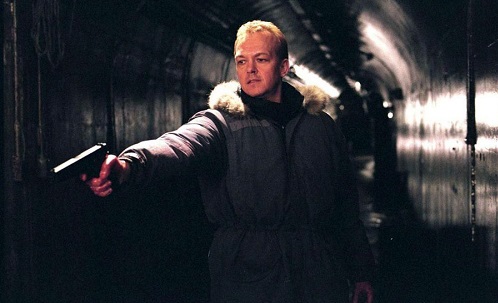 Who is killing off the traumatised cops in a remote wilderness rehab center? Will it be the token British guy? Why yes, it will.

Sharon Stone and the girl who played Patti Simcox in Grease go to visit their recently widowed gal-pal at her farm on the borders of a sub-Amish community, where somebody is killing off the locals. Is it The Incubus that the Hittite community accuse widow lady of being? Why no, it’s the boy-raised-as-a-girl from the farm next door. Didn’t see that coming.

This Korean flick uses the supposition that, as an Asian horror movie, it’ll be the ghost of some long-haired girl killing off students at an academic sit-in for the top performing kids of a Seoul high school. Grades are everything, so it could be anyone.

The Ace here is not who the killer is, but who it’s been all along, which comes out of left field but is awesome nonetheless. 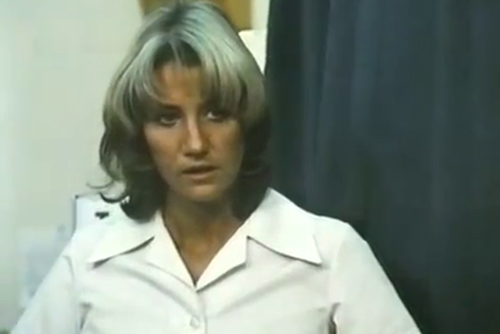 There aren’t a whole lotta seeds planted for you to guess who the mystery javelin-wielding killer after youthful athletes is, but at the same time given that top-billed Sally Kirkland doesn’t have a whole lot of meat to her role, it becomes kinda obvious near the end that she’s going to get to ‘flex some acting muscle’ at some point.

This was actually lost on me though, because I had no idea what she looked like when I first saw it and thought the killer was going to be the lesbian swim coach. 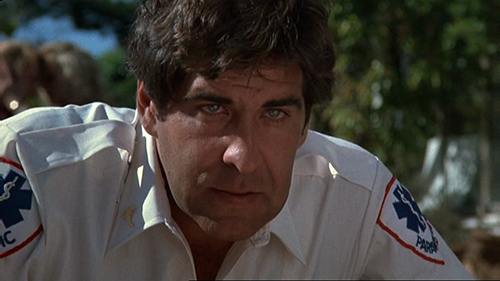 I’d not seen The Final Chapter at the point I slotted this VHS into the machine so assumed it was just going to be a standard Jason venture. BUT NO. There is a mystery killer pretending to be Jason. Who is it? Lordy, they could not make it more obvious if they tried. Still, I was all “WTF is going on??” when this random dude was lying dead on the ground. It’s probably why I don’t hate the movie though.

There are so many viable suspects here that the killer, when identified, is pretty out of the blue, but given the big traumatic-past-event story, looking for a character the right age to be involved narrows the field significantly (see also: The Prowler), so it should be no surprise. That the film ends as soon as the fiend is revealed is lame though. 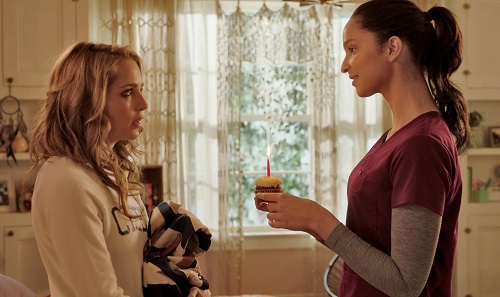 Who is killing Tree over and over and over and over as she’s stuck in a time loop? Only time will tell. And tell again. Actually, it’s fairly obvious given that the film almost deliberately chooses to focus away from the character, the same method used in Broadchurch and I figured that shit out!

Thirteen episodes sees a wedding party and a few locals burned, skewered, propellered, and crushed to death – but who is behind it all? I had a few guesses throughout, especially the guy who ‘died’ in a random accident rather than a homicide. But it wasn’t him. It was the groom, hidden by a series of deliberate misdirections.

Less an unmasking than a roulette wheel spin that lands on a random guy, who has no concrete motive provided in the matter of seconds during which we see his face, a flashback that tells us nothing, and then he’s dead.

Like the way Mrs Voorhees shows up for the first time at the end of Friday the 13th and just is the killer, Ben Willis doesn’t put in an appearance (unmasked anyway) before Julie figures out he’s the killer, so he never really appeared on the line-up of suspects beforehand. 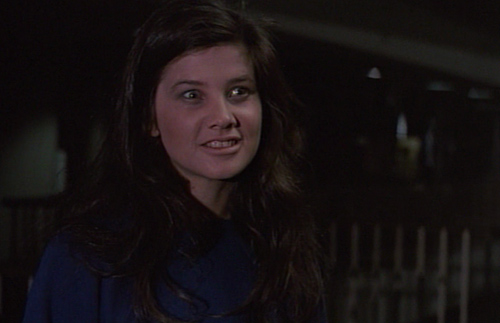 Daphne Zuniga is a college girl with no memory of anything before age nine who begins experiencing weird occurrences in the run up to her final initiation into the Delta Rho Chi sorority. It’s likely to be the mystery individual who has broken out of an institute. But who is it? WHOOOOO?

The film toys with a lot of Freudian blah, Daphne’s little trances when she looks in a mirror, and ultimately we find out if her EVIL TWIN SISTER, who intends to kill her and take over her life!

A review I read of Intruder stated that the killer was Jennifer’s ex-boyfriend and saw the film early enough in my genre interest that I didn’t figure it was all a ruse. 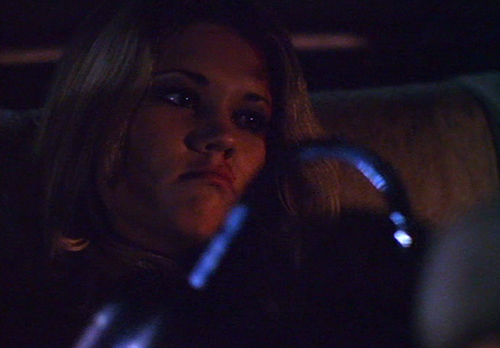 The local teens are being hunted by a hooded, hook-handed killer in this Scream / Last Summer cash-in, which tells us it’s the recently escaped guy who killed the final girl’s mom and the final boy’s dad thirteen years earlier, only for it to be a father-daughter killing team instead, using his escape as the perfect patsy for their own revenge for, it seems, a bad break-up.

A babysitter is tormented by a masked killer who is about to stab her and then… stops. He can’t do it, she’s different. They bond. They screw. What the fuck is going on? Is this even a slasher film??

Turns out the handful of victims we attributed to the intruder were in fact the babysitter’s kills, all to get the attention of some guy. She’s a regular bunny boiler. I totally did not see this coming. 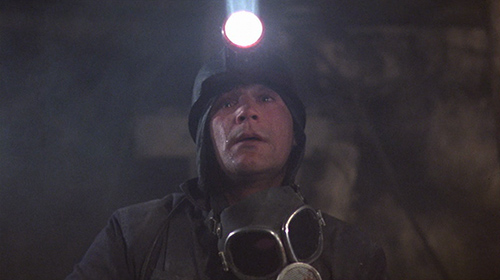 All write-ups of My Bloody Valentine I scoured before seeing it just went with the escaped-lunatic-returns-to-town explanation, so I thought we were dealing with Harry Warden from the off and was confused when TJ pulls off the miner’s mask and it’s… Axel!?

There’s little mystery to this cross-European effort shot in Prague with teens from an international high school celebrating their finals by partying after hours at a water park, where a skull-masked dude with a machete chops, skewers, and – in the most memorable scene – sticks his blade through the bottom of a waterslide.

With American, German, Czech, Australian, and British characters in the roster, who do you think it’s going to be? Yes, the British guy. Again.

A teen couple are slain after their graduation dance in 1945. The dance is banned forever. Well, 35 years. Come 1980 the nasty soldier-of-doom is back with various sharp things to kill anew.

Seeing as there are only two characters old enough to have been of age at the time of the first killings, it’s really no surprise when the Sheriff is unmasked by the boring final girl at the end.

Is Norman Bates up to his old tricks after finally being released from the asylum? Motel managers disappear, sexy teens are attacked by a woman in a long dress with a big knife, Lila Crane is making trouble…

But it turns out the kind little ol’ lady from the diner is the one doing it, convinced she’s Norman’s real mother and defending him from all those intent on making his return to society miserable. Her motive is all undone come Psycho III though, so she wasted everyone’s time.

I fell for Billy’s little act and never considered a second killer in the first one; In Scream 2 I figured out Mickey quite easily but had ignored Debbie entirely – which is weird as everyone else I’ve ever chatted to about it guessed her and not Mickey; Scream 3 was ruined by a book about the series I flicked through shortly before its UK release; Everyone was supposing Jill was behind the mask in 4 but it passed me by.

This so-so budget affair is elevated by some creatively gruesome deaths and the gag that the homeless guy a group of amateur filmmakers scare away when they break into a soon-to-be razed movie studio is the one who knocks them off!

Ryan Murphy-produced sort-of sequel, sort-of remake to the 1976 dramatization of the unsolved Texarkana killings of 1946 is a clever concept for the most part. When I recently re-watched it, I’d forgotten who the killer even was, and surprised (again) that the first victim/final girl’s boyfriend wasn’t dead at all, and that he’d faked it all to pretty much move away. Like, rent a U-Haul, dude. There’s another killer too. 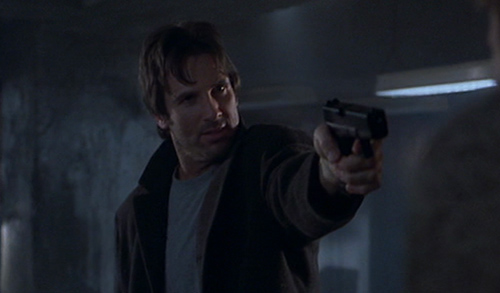 There are so many suspects in Final Cut that the revelation that Hart Bochner’s Professor is the killer kinda just results in an “Oh, OK, fine,” response, because they’ve left so many potential red herrings alive for the climax that the huge twist promised by the producers way back when it was announced probably just meant “we’ve got 9 possible killers – no one will ever guess!”

For the record, the academic book Games of Terror gave away the killers in Friday the 13th, Prom Night, Happy Birthday to Me, Graduation Day, and the ‘revelations’ in Hell Night and Terror Train (the latter would’ve probably fooled me though). A friend of mine inadvertently gave away whodunit in Urban Legend as well (but that was quite obvious, right?)

tagged with Friday the 13th, Scream, sequel city, slasher, the 80s, yo! Hollywood