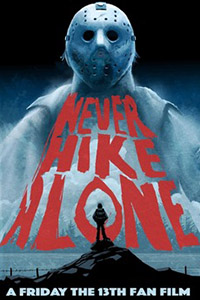 I’m not one for fan films really, as they tend to amount to dollar store masks, ketchup, and that girl from fifth period bio convinced to take her bra off, all shot on either Mom and Dad’s camcorder or an iPhone.

However, I started to hear about Never Hike Alone through various Friday the 13th sites and eventually found some time to sit down with it. Actually, it took three sessions: The first ten minutes one day, before other stuff got in the way, then another 25 minutes in the morning before work, and finally the rest when I got home.

Putting it bluntly and after the disclaimer that I know nobody involved or had anything to do with the production of this film… it’s fucking amazing.

Given that those of us loony enough to have the words ‘Camp Crystal Lake’ tattooed on our forearms have waited and waited and waited some more for almost a decade now for anything Jason-y to come out way, it looks like Vincente DiSanti and Nathan McLeod finally said ‘no more’ and damn well did it themselves.

Talk of a Jason-centric TV show for the CW made me cringe, as it sounded like they wanted a Riverdale-esque drama that just happened to be set near Crystal Lake. Nah, guv. No sale. Never Hike Alone, however, is pretty much how I’d have envisioned such a project – vignette-style stand-alone mini-films that show encounters various poor souls had with Jason – although realistically how much variance is there in that idea?

Anyway, we meet up with Kyle, a hiker-vlogger type dude who’s driven out into Wessex County to follow a trail, intermittently stopping to make little how-it’s-going videos, please advertisers by saying nice things about their all-in-one spade/axe/thingy, and just enthuse about being out in nature. The most crucial aspect of the whole thing is realised by Kyle being a decent guy, something we rarely see in slasher flicks of late.

Kyle camps out and, the next morning finds a marked trail not found in his guidebook, then a No Trespassing sign, which will save him time on the trek and feed his curious nature. Soon after, he stumbles across an old, abandoned summer camp, and it’s infamous sign:

Deciding to spend the night there, Kyle regales his viewers with what he knows about the legend of Camp Crystal Lake, leaning heavily on the events of the original film as an axis to pivot things from. He explores, finds creepy tags that indicate where bodies were found, and then discovers that perhaps somebody is still there.

A tustle with his attacker leaves Kyle with some injuries but he manages to outrun Jason and hide, realising this his only chance of survival is to go back to the camp for his medical kit before his cuts get infected. He makes a final broadcast on his dying Go-Pro, and heads back to patch up and get the fuck away from the place – but, of course, Jason is never far away.

What impressed me most here was that DiSanti and McLeod ‘get’ what made the old movies so good – not gory denouements every X-minutes or a T&A quota – the very concept of somebody out there in the lush green woodland, an unstoppable force of nature in nature, the mysticism and campfire tale quality of the legend… Akin to those first twenty minutes of the 2009 reboot, Never Hike Alone wades deep into the feel of the early films and plays happily there.

Could my gushing be that I’m just so thirsty for a new Friday the 13th that I’m over optimistic? I thought of that, but the $40,000 short also proves what I’ve been moaning on about for several years – that this series can be kept buoyant without multi-million budgets.

There’s also that cameo appearance in the last few minutes – Thom Mathews (my preferred Tommy) as one of three paramedics who pick Kyle up but don’t hot-foot it out of the woods quite quickly enough. This scene feels strangely surplus, which is strange as without it the body count would actually be zero. It’s not worth complaining about in any way, this film is a love letter to the series, so why the hell not?

I’m hoping that the tsunami of goodwill directed at Never Hike Alone might push whomever holds the rights now to seek out DiSanti and McLeod in creating the next big screen film, or, hell, more like this, as what they’ve achieved feels more like the Friday we all fell in love with that the last four or five official entries.