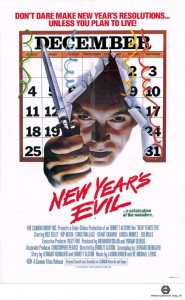 Dire-logue: “He’s mutilated the breasts of most of his women. That’s a common characteristic of a psychopathic killer.”

A slasher film set on New Year’s Eve should be easy stuff: gather victims together, give them booze, let them flirt and have sex, page a psycho killer… Here, the killer offs a victim as the clock strikes twelve in each of the time zones. It should work – it doesn’t. FAIL!

This soporific holiday of dullness concerns a coast-to-coast NYE broadcast presented in California by the obnoxious Diane Sullivan (a.k.a. ‘Blaze’ – the “first lady of rock”), a poverty-row Sharon Osbourne. While callers vote from across the nation vote for their favourite new wave rock song of the year, a maniac using a vocoder calls in and announces he’s going to murder somebody Blaze knows as the clock strikes twelve each time, finishing with her when midnight comes to the west coast…

In craptacular fashion, the killer’s face is revealed almost straight off the bat and has him interact like a regular member of society while he seduces women like a Ted Bundy protege and jockeys them into position for the midnight knock-off. Things would have been a lot better if the killer had adopted the eerie Stan Laurel mask he wears momentarily at the end and anonymously slain his vics in one location, such as the venue of Blaze’s broadcast. But no, instead our unnamed killer stalks and chats up his prey, padded out with the horrible interludes of crappy rock.

Once the killer’s identity is revealed, we’re treated to a long speech that contains his useless, misogynistic excuse for a motive and the reasons he wants to kill rock’s first lady. By this point, the film has all but collapsed under its own pretensions and attempts to make things up with a twist we’ve seen coming since the first ten minutes.

Have a good chuckle at the dreadful rock bands who perform and laugh even more at the zombie-like motion of the crowd, who simply drop themselves back and forth – it’s the only thing worth remembering here.

tagged with calendar carnage, slasher, the 80s, what the hell!?, who finances this crap!?