Lies! So many lies! 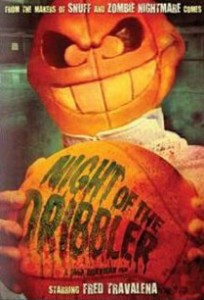 NIGHT OF THE DRIBBLER

Laughter Lines:  “Last time I saw faces like that was on the court 51 seconds ago.”

About as misleading as anything could be, this Canadian ‘comedy’ may look like it’s about a masked loon doing in basketball players, but this takes up about 8% of the runtime. There’s a reason the film was not released in the US for almost twenty years.

Essentially a vehicle for late comedian Fred Travalena, he plays three roles: The basketball coach, a commentator named Dick Airhead, and the detective investigating attacks on the revolving captains of the Watergate High Plumbers – only two of which are fatal – a crappy team who haven’t won a game in decades.

Waterboy Stan wants a chance to play – is he the one is the basketball mask rigging equipment? Probably not. But who cares when the film is so exhaustively painful? Slasher parodies were already worn out by 1982 and Night of the Dribbler brings nothing to the table, earning that extra half-star for non-awful production values and maybe two jokes I quietly smirked at.

tagged with Canuck, death on campus, I want to die, what the hell!?, who finances this crap!?