Give auntie a kiss 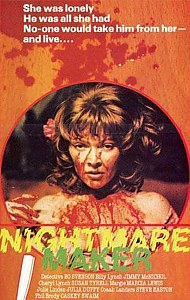 Laughter Lines: “It doesn’t make a whole lot of sense for a fag to rape your aunt.”

More of a prelude to the glossy 90s psycho thrillers like The Hand That Rocks the Cradle and Single White Female than any kind of Halloween clone – this title was highlighted as a Video Nasty back in 80s Britain and has yet to be re-released after a failed attempt to resubmit (as The Evil Protege) in 1987.

Tyrrell impresses as the over-protective aunt of Billy (McNichol), having raised him since his parents were killed in a suspicious car accident fourteen years earlier – which featured decapitation-by-log before Final Destination 2 did it. As Billy approaches 17, Aunt Cheryl decides she’ll do just about anything to ensure that he never leaves her, including screwing his chances at a basketball scholarship by drugging him before an important game.

After she stabs to death a gay TV repairman who rejected her advances and tells everybody he tried to rape her, the homophobic Detective in charge of the case suspects it was actually a closeted Billy instead. Sooner or later, she loses it entirely and begins killing anybody who comes close to learning the truth, in a twisted play on themes from Friday the 13th.

Despite being bundled in with grue-fests, there’s nothing particularly repellent here. In fact, Night Warning is one of the classier slashers from the early period, with more thought going into character motivations rather than a string of nubile teens lined up for the slaughter. Look for a young Bill Paxton as the jerky jock who gets the carton of milk poured over his head.

Blurbs-of-interest: Tyrrell played another unstable matriarch in Far From Home; Julia Duffy was also in Wacko; Bill Paxton was also in Mortuary around the same time, plus Deadly Lessons and Club Dread; Britt Leach was in Silent Night, Deadly Night; Caskey Swaim was the arsey paramedic in Friday the 13th Part V: A New Beginning.

tagged with before they were famous, gay stuff, slasher, star power, the 80s