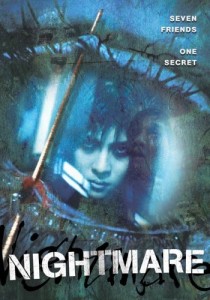 About the 500th Ring-inspired horror film to come from the East, but fused with slasher movie rules and a story very similar to the same country’s/same year’s Record, concerning a clique of young friends with a dreadful secret that literally comes back to haunt them.

The first forty minutes’ groundwork builds the story, concerning the suicide of Kyung-ah, an introvert member of the gang, who was revealed to be the legendary jinxed child of a small town where a couple of the friends used to live, and where rotten luck befell everyone around the girl.

When her best friend – understandably upset at the betrayal – asks her to keep out of her life, Kyung-ah throws herself from the top of a building and dies… or does she? Two years down the line, guilty-party Sun-ae, who revealed the truth in the first place, returns from a stint in a US institution, believing that Kyung-ah is haunting her and looking for revenge on the group. Meanwhile, sweet natured heroine Hye-jin recurrently encounters the child-ghost of her old friend, and the ancillary members of the group begin dying in strange ways.

While the plot is certainly competent and more imaginative than Record, it sometimes becomes confusing as to what era we’re in and, once the eventual truth surrounding Kyung-ah’s death is revealed, regurgitates several questions and highlights the liberties taken by writer/director Ahn.

The spooky twist ending also requires a vast suspension of belief and mirrors the ends of contemporary J-Horror successes such as The Grudge and Phone. Now if we could only marry the visual atmosphere created here with the ‘classic’ American genre rules, that would be the stuff dreams are made of.

tagged with get your own ideas!, I know whatcha did!, J-horror, slasher