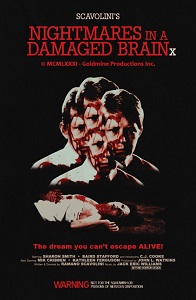 NIGHTMARES IN A DAMAGED BRAIN

“The nightmare you can’t escape alive.”

Laughter Lines: “You lose a dangerously psychotic patient from a secret experimental drug programme and all you can say is ‘I’m sorry’!?”

This one was notable for resulting in the imprisonment of its UK distributor after an uncensored version found its way on to video store shelves at the height of the 80s Video Nasty extravaganza.

Extra credit for trying to make a bit of sense out of the killer’s madness, but on the whole this is a bit of a boring picture, sensationalised because some of its violence excesses, often incorrectly credited to Tom Savini, who just advised the production on a few things.

George Tatum is a mental patient taunted by a recurring nightmare (actually a memory), who is being mentally reconstructed by a group of doctors using experimental drugs. When he is released back into society, he can’t handle any situations that relate to his dream, and runs away to track down his ex-wife and three really annoying children, who scream at one another far more than any of George’s victims. 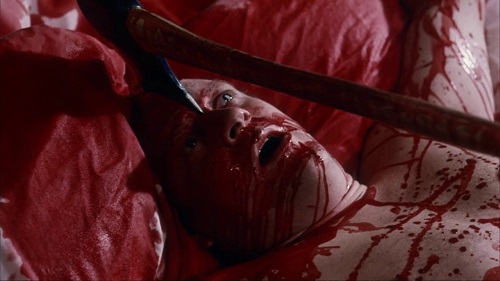 Things are cranked into Halloween gear when he murders the babysitter and comes after his kids. We are finally treated to the full uncut memory as he recalls gruesomely doing away with a hooker and his father when he caught them in the act as a boy, lopping off the woman’s head with an axe in slo-mo, then burying the hatchet in his bound-to-the-bed dad’s head. This blood-soaked scene, shot with a concerning almost sexual nuance, will most certainly be the one that earned the film its ban.

Shades of Problem Child dominate the rest of it with the fucking punchable C.J., all leading to a callous Friday the 13th: The Final Chapter-style last final shot.