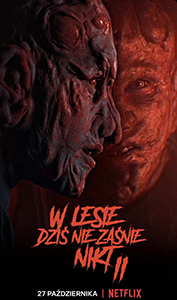 NOBODY SLEEPS IN THE WOODS TONIGHT II

A timely follow up to the 2020 Polish summer camp slasher, part two begins with the twin monsters and sole survivor Zosia holed up in cells at the local cop shop.

Optimistic rookie officer Adam pedals into work as his superior escorts Zosia back to the house to get her perspective and leaves her handcuffed to a bed above a section of the meteor, which soon does its thing, infects her, and turns her into one of the mutants.

Adam and fellow cop Wanessa eventually grow concerned and find themselves thrust into the horror, along with two survivalist types, the camp manager, and a hooker. Monster-Zosia makes mincemeat out of most of them and converts Adam into a fellow mutant. They kill a dog-abusing vendor, hook up in a rather confronting sex scene, and return to the police station to liberate their family members.

The gross-out comedy facets are pushed to the fore in this grotesque combo of any Wrong Turn sequel you like, with parts of Hatchet thrown in. There are some funny moments, but it just doesn’t commit itself and seems to drag on forever the longer it continues.