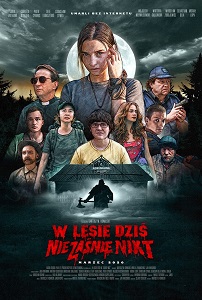 NOBODY SLEEPS IN THE WOODS TONIGHT

Poland. Land of pierogi, Auschwitz, and questionable human rights for gay people. Our school took us there in the 90s to visit the aforementioned concentration camps. Heavy.

In 2020, the country joined the ranks of Euroslash with this slick looking pick n’ mix of Wrong Turn, Just Before Dawn, and Hatchet. Thirty years after a mailman is dragged screaming into the cellar of a remote woodland home, a busload of teenagers arrives at Camp Adrenalina, a rehab joint to prize their cell phones and tablets out of their hands and show them there’s more to life than Instagram and gaming.

Group 4 pits girly Aniela, wannabe player Daniel, shy Bartek, nerdy Julek, withdrawn Zosia, and their guide Iza against the wilderness. They trek, camp, sit around the fire, and find a hollowed out stag. Meanwhile, whatever has been living in that cellar escapes when the old lady who feeds it takes a bad fall and it steals her keys, killing her as it vacates. 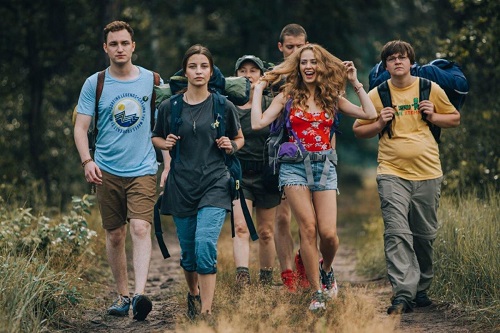 When Bartek disappears after a sexy night time booty call with Aniela (in a cute twist he turns out to be a virgin) and all that remains is blood on a nearby tree trunk, the others split into two groups – Iza, Julek, and Zosia to look for help or a phone, while Bartek and Aniela remain at the camp in case Daniel returns. The recon team stumble upon the house and run into the hulking deformed maniac, who manages to kill Iza, leaving the teens to save themselves.

From a hermit living in a shack, Judek and Zosia learn that there are twin killers, boys who found a crashed meteor in the woods years earlier, which leaked tar-like shit that turned them into psychotic cannibals overnight, causing their mother to lock them in the cellar and throw down animal carcasses. 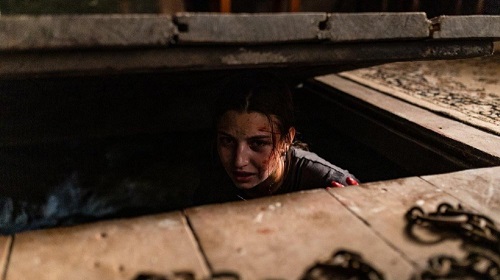 Elsewhere, Bartek looks for help in a remote church, but finds the resident priest there has other ideas, nodding to Poland’s shitty record with LGBTQ residents, and culminating in a grisly woodchipper demise. Eventually, it comes down to Zosia, who we learn lost her family during a selfie-caused car accident – though why she’s at a camp for tech-obsessed teens is never addressed.

Lots of ideas are borrowed from other films: The sleeping bag kill is a direct recreation of that in Friday the 13th Part VII, and there’s a head-to-groin axe split that recalls Wrong Turn 2, but messier. There’s a great scene where Zosia, given the chance to run, instead creeps upstairs with a large machete and slowly tip-toes into the room where one of the loons is napping to take a gruesome revenge. 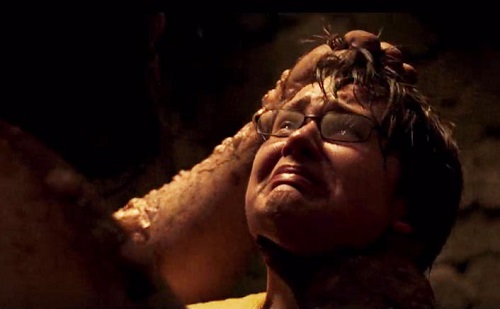 Nobody Sleeps gets further than a lot of its brethren by carving out nicer characters than expected. Given the need to adhere to certain stereotypes, none of the endangered group fall into assholery, revealing parts of themselves that make you feel sad for them when they meet the business end of an axe. The wheels work loose towards the end, but for a first international horror export it’s pretty damn solid.