Friends of my folks have a son called Michael Myers, so this could have been a ménage a trois of sorts… Anyhoo, never since the prospect of Chris Evans (sexy Hollywood star) versus Chris Evans (gorky UK radio dweeb who spent most of the 90s with his head wedged in the Gallagher brothers respective arses) has a big-hitter of the namesakes been so exciting. For me, anyway. Maybe you have more exciting things to be excited about, excitoface.

So, let’s start with Myers, the older, MICHAEL: 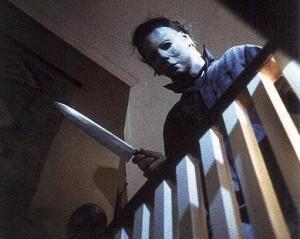 Here he is then, the first of the seminal slasher movie boogeymen (unless you want to count Leatherface), born in 1957 (ironically the same year major rival Jason Voorhees ‘drowned’ in Crystal Lake), stabbed big sis Judith at the age of six, locked away for fifteen years before escaping, returning to hometown of Haddonfield, Illinois, to stab lil sis Laurie. Underestimates Laurie’s ability to survive said stabbing and goes into coma for a decade. Returns time and time again throughout late 80s and 90s before being wiped clean by Hollywood, losing his head, regaining his head, wiped again and reignited as a white trash shadow of his former self… 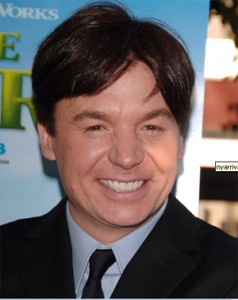 Born in ’63 (the year other Mike stabbed sis), but in the land of pleasantry that is Canada. Did not dress up as a clown to kill sister and was not, as far as his biog states, locked up at Smith’s Grove for a decade and a half…

Instead, Myers went to Saturday Night Live, created the character of Wayne Campbell, spun that into a movie, spun a sequel outta that, languished in a bit of a non-place for a few years before becoming ultra-starry from the Austin Powers films and as the voice of Shrek.

He then donned a bleached William Shatner Halloween mask for the look pictured above, only until Laurie managed to pull it from his face on the solitary occasion we’ve ever seen Michael unmasked (with the possible exception of Rob Zombie’s Halloween II, which I haven’t seen yet). 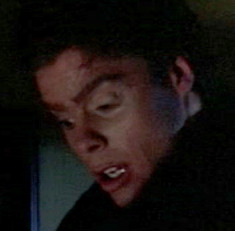 What a good looking young man he almost coulda sorta been if, y’know, he wasn’t a mute psycho obsessed with knifing his bloodline to death for reasons never really explained, unless you’re into that Thorn crap they tried to palm us off with in Halloween 6.

After that, for sequels H20 and Resurrection, Michael was given a slightly smoothed out look and then, when Rob Zombie was charged with re-starting the entire franchise, he became White Trash Michael in need of shampoo. Sad times. 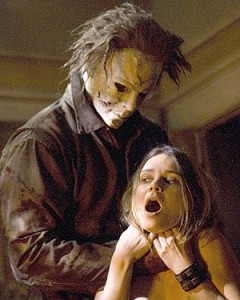 In a slightly sunnier part of the universe, Mike Myers started out as geeky-metaller Wayne Campbell who, with best bud Garth Elgar, presented Wayne’s World, which was made into a film called, uh, Wayne’s World about the show being picked up by evil big-shot Rob Lowe and exploited. Nothing much happens but the film makes me piss myself with laughter 17 years after I saw it at the movies, largely remembered by all for the time I pulled a bendy straw out of a sipper-flask during quite a silent moment, thus resembling a kind of thunder-fart in the cinema… 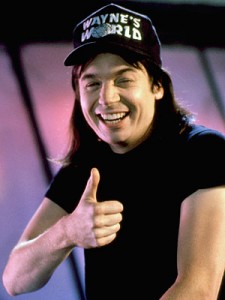 Wayne and Garth returned for a not-as-good sequel in 1993 before vanishing for good. Rumour was that Myers and Dana Carvey could not agree over who got the best gags and fell out.

Still, for Mike there was hit-and-miss comedy So I Married an Axe Murderer, which almost sounds like a slasher flick. But isn’t. Then four years later he returned as James Bond-wannabe Austin Powers, British, dentally-challenged, 60’s trapped spy for MI5/6/7/whatever, to save the world from the arguably funnier Dr Evil… 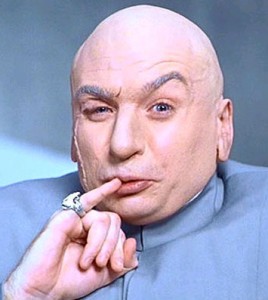 After three Austin Powers films (with a fourth in the pipeline), Myers voiced green ogre Shrek for the Disney franchise and attempted to kick-start a new character in 2008 with The Love Guru, but nobody seemed to care about it.

Michael: can never be dethroned as the original stalk n’ slasher, amassing (across the original set of films) a staggering 69 victims, plus another twenty or so in the remake.

Mike: The Austin Powers films were phenomenally successful, turning Myers into an A-lister, but Wayne’s World will always be my favourite of his!

Michael: Halloween III didn’t involve Michael at all. Halloween 5 was boring and the remake (and probably its sequel) may well have ruined his appeal for good.

Mike: Goldmember wasn’t very funny. Did anyone actually see The Cat in the Hat?

Michael: A “third” (albeit eleventh really) Halloween film is planned for a 3D release in 2010. What this will add to the crumbling towerblock that once was the greatest slasher series going is unknown, besides 3D boobs. As it’s going to be written by Todd Farmer, odds are it will make next to no sense and be riddled with plotholes and contrivances. See Jason X or My Bloody Valentine 3D for evidentiary support.

Mike: if Austin Powers 4 happens, it’ll doubtlessly be huge, as will the inevitable next Shrek outing, but otherwise things are looking a bit quiet in the Myers’ yard of late… Hmmm.

VICTOR: For the first time, I’m going against my slasher loyalties and giving it to Mike Myers as Michael has been reduced to a trailer park caricature of his once great self thanks to corporate greed and lack of imagination. But it’d be nice if Mike Myers took up a cameo in the next Halloween outing…

tagged with before they were famous, calendar carnage, Canuck, Face off, Halloween, remake, sequel city, slasher, star power, yo! Hollywood