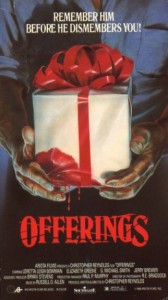 “Remember him before he dismembers you.”

Dire-logue: “How come people in these horror movies do such stupid things?”

As the score tinkers along like somebody held up a tape recording of the theme from The Fog and hoped for the best, while the characters utter inaudible dialogue and we wonder if John Carpenter would sue over it, you might ask yourself just why Offerings was ever made? It’s not as if we haven’t encountered ye olde asylum-escapee-goes-after-group-of-kids schtick before. Well, there’s a dinky hook to this one. Y’see, the killer, obese, slightly deformed remmy John Radley, sends selected body parts from each victim to heroine Gretchen because she stood up for him to the nasty kids X years earlier when they tormented him until he fell down a well!

The grown up kids are now Gretchen’s pals and provide John with his quarry as they die by rope, vice and, uh, flashlight. So much if pilfered from Halloween that even John’s shrink is tailing him around the small township in a poor cover version of Doc Loomis. And why is Gretchen friends with the horrible kids? Is she that dumb? There’re a couple of decent giggles as the script tries to poke fun at itself and the scene where one guy is being hanged outside the lounge window while his folks are entranced by the TV is golden, as is the vice-death guy who tries to ‘do ghetto’ and ponders aloud in the street why girls only want him for his brain while clasping his package. In spite of these offerings, Offerings doesn’t offer up much else.

tagged with slasher, the 80s, what the hell!?