Oh, how we laughed. Then died.

Have you woken up to a pie in the face? Been told some bizarre fact about someone that you naively took as gospel? Or did a group of your peers play a joke on you so damaging that at this very moment you’re sketching out ideas for a gruesome revenge scenario?

Hey, it happens! Just take a look at these five gags that went “a bit wrong”… 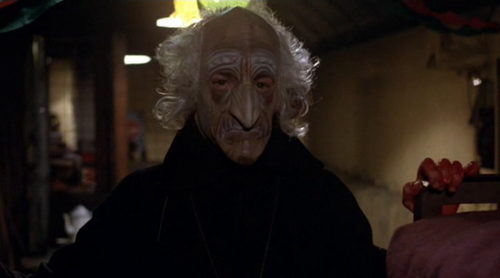 Kenny Hampson and The Corpse Lady of Terror Train (1980)

Why: Prank-loving med student Doc (a yet-to-be-semi-famous Hart Bochner) masterminds a cruel initiation gag on shy, magic loving dork, Kenny, to induct him into their fraternity.

The Joke: On the promise that if he ventures upstairs to the bedroom of a (frat?) house, Kenny will pop his cherry with campus hottie Alana (Jamie Lee Curtis), who’s only been clued in a little ways in the plot. She hides behind a veil and says things like “kiss me, Kenny,” while the skinny lad disrobes and climbs into bed with a figure whom he believes to be Alana. And Alana and her gal-pal Mitchy think it’s just a friend of Doc’s.

Instead, the girl in the bed is a dismembered corpse pilfered from a hospital morgue. Kenny almost gets down and dirty with it before she quite literally falls to pieces in his arms and then freaks out in some weird disco spinning motion that sees him entangled in a veil while his frat-brothers-to-never-be burst in and laugh and point.

The Revenge: Three years later, Kenny’s back from the mental hospital and he’s still understandably pissed and homicidal. Doc, Alana, and friends have boarded an excursion train to celebrate their graduation costume-party style and it’s not long before members of their clique start disappearing until only Alana is left to fight off Kenny…

The Learning: Pick your victim carefully. If he appears to be your typical introverted nerd, chances are he’s a raging ball of anti-populous fury who might snap if he’s rejected and ridiculed one more time. 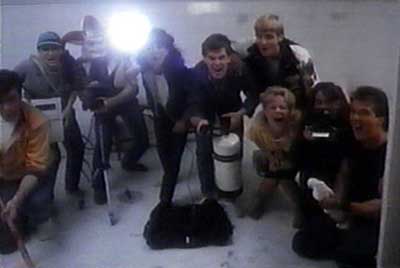 Marty Rantzen and The Naked Shower Humiliation of Slaughter High (1986)

Why: Marty (Simon Scuddamore) is the requisite bookish nerd at Doddsville High (which looks suspiciously like Surrey, England), who annoys the wrong group of popular jocks and their bitchy girlfriends.

The Joke: In retaliation, they decide to play an April Fool’s prank on him by setting him up with campus hottie Carol (Caroline Munro) – seeing a theme? – only to find that after he strips naked in a shower stall, the curtain is ripped back and her group of friends are there with a camera and hose him down. On this occasion, the group are caught and given detention by the coach and so nasty leader Skip sets about resetting the scales and this ends up with Marty getting doused in acid that disfigures him.

The Revenge: Ten years later, the popular group receive invites to a bogus reunion party at the now abandoned school, where Marty – donning a suitably eerie jester mask – soon locks them in and unleashes a veritable cornucopia of fatal ‘jokes’ on them: Poisoned beer; an acid bath; electrified bed… until it’s just him and Carol left alone in the old school.

The Learning: Similar to Terror Train, hell hath no fury like a nerd scorned – or, in this case, scorched. And that groups of jocks are unbelievably stupid. 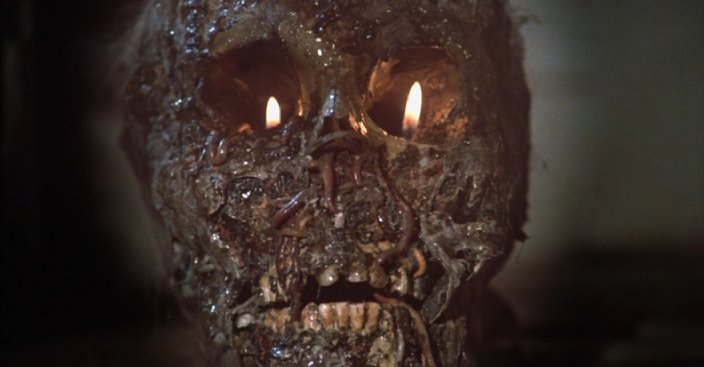 Cropsy the Janitor and The Wormy Skull in The Burning (1981)

Why: Mean-spirited summer camp custodian, Cropsy, ritually torments the kids of Camp Blackfoot. We don’t see any of this but it’s related later around a campfire. He used to freak them out with his oversized pair of pruning shears. Either way, the campers hate his ass.

The Joke: A group of teenage boys decide to get their own back on the Crospter by creeping him out, possibly in the hope of inducing some sort of coronary. One of them sneaks into his on-site shack and deposits an item at the foot of his bed before going back outside where the group begin tapping on the window. Gently at first and then louder until the man awakes and is greeted with the sight of a worm-infested skull with a candle inside it. Freaking as required, he spills the skull on to his sheets and is soon engulfed in flames. Turned into a “fucking Big Mac” with no hope of skin graphs restoring his appearance, he’s finally released from the hospital five years later and the only thing on his mind… is MURDER!

The Revenge: Crospy crashes another summer camp in the vicinity and stalks and kills various teen campers, using his trademark shit-scary shears to slice, dice and snip shrieking teens to death, including the memorable five-for-one raft scene.

Strangely, Cropsy’s revenge is of the scattergun approach. He targets campers. The particular group responsible get away Scot free (bar one who happens to be a counsellor at the new camp) and the unknowing, innocent, holidaymakers of Camp Stonewater become is hapless new prey.

The Learning: Think through your prank logically. Is there a chance it could go awry and end up maiming somebody? ‘Cos if it does, odds are they ain’t gonna be pleased about it. Also, some victims go so batshit crazy that they’ll take revenge of anyone they can… 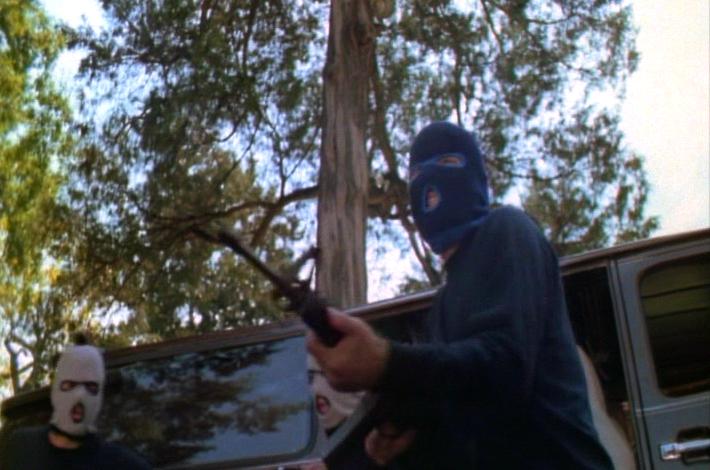 Why: Why not? it seems. The brothers of “the wildest frat house on campus – yeeeaaaahhh!!!” decide to fake a fucking MASSACRE just so their lazy president can cheat on a test and keep his car.

The Joke: So, while a group of masked assailants “gun down” random students at the front of the school, walking bouffant, John, oh-so-cleverly marks his own test paper with the perfect score and hides it in the completed pile while everyone’s attention is focused on what’s happening outside.

The Revenge: Weirdly, in this case, the prank doesn’t affect the killer at all. Instead, it serves to prevent the local cops from taking seriously his arrival on campus when the bodies start piling up – fortunately those of Lazy John and a couple of his idiotic frat brothers included.

However, sucks to be one of the other poor schmucks stuck on campus with an anonymous, unmotivated psychopath.

The Learning: You might think your little joke is a victimless crime, but the joke’s on you if you need help further down the line and nobody believes you! At that point, you become the boy who cried wolf and, frankly, you deserve to be throttled with gym equipment. 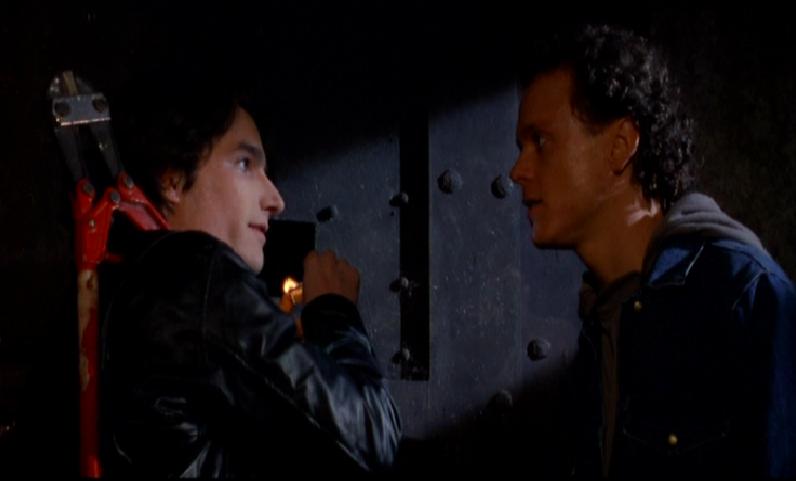 Why: Again, getting into the fraternity/sorority of your choice trumps all semblance of sense and rational thought in the American – or Canadian – college system. Fuck the consequences, I want in!

The Revenge: Of course, Malius escapes – after killing the dorky one – and heads straight back to the frat house where a big party has just finished, leaving a handful of amorous couples alone in the dark. One by one, they all get offed in various ways, each time left with a little fortune cookie style quip from the E.T.-voiced loon: “No TV! No sex! No way Sam Rockwell is ever gonna live down being in this!”

There we have it, just SOME of the jokes that didn’t go as planned. Other notable examples include breaking into old buildings with bloody histories to steal ornaments n’ such, pretending to be dead, pretending to be alive, tricking your friends, scaring your parents/siblings/housemother…

The list is endless so stick with whoopee cushions and custard pies. 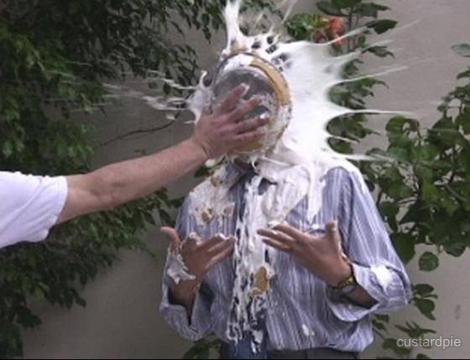 tagged with before they were famous, calendar carnage, Canuck, death on campus, slasher, sorority, spoilers, summer camp, the 80s