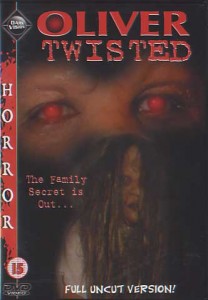 “The family secret is out…”

With a title like that, I was expecting some psychotronic re-telling of the Dickens classic. Unfortunately though, we’re not treated to the gory demises of Fagan, the Artful Dodger or Oliver Twist (how annoying was that kid?) and instead it’s a modest Halloween copy from Florida.

Institutionalised plate-headed Oliver goes into a coma after being sunk by two anaesthetic darts after he murders two of the hospital staff. Refusing to take him back, he is instead sent to reside with his aunt and her two kids – one of whom is called Olivia. I think we all know where this is going…

“Livvy’s” bratty brother Jeff becomes obsessed with Oliver, who remains zonked out in the spare room while Livvy herself starts having odd premonitions of murders which, she believes, aren’t real. The mailman gets his hand chopped off with a machete when Oliver wakes up and goes walkabout and then two teen couples are invited over the celebrate Livvy’s birthday for no other purpose than to serve as thwacking material for Oliver.

Bargain basement productions values notwithstanding, there’s a good score and one neat scene that, albeit ripped off from Dressed to Kill, cranks the tension towards the finale. From the look of it though, this could well have been shot in the mid-80s with its drained colour and naive teenager-cum-blade-targets, Karen Black and freakin’ Erik Estrada (as mom and meddling doctor respectively). Neither of them have much to do and probably wish they were back on the set of Airport ’75…

The blindingly obvious twist is nicely played out, although we’re never informed of the source of Livvy’s flashbacks to the baby in the tub, nor what happened to Oliver in the first place that landed him residence in the asylum… Even with these unexplained oddities, overlong running time and some dreadful hairstyles, it’s still more fun than sitting through the musical Oliver! any day…

Blurbs-of-interest: Karen Black can also be found in Some Guy Who Kills People, Children of the Corn IV, Out of the Dark, and Curse of the Forty-Niner.

tagged with after they were famous, children are evil, get your own ideas!, hair don'ts, Halloween, Nu-di-ty, slasher, star power