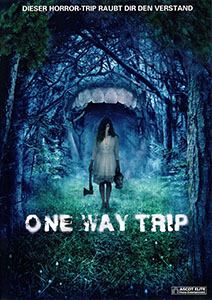 “They wanted the ultimate kick – they got it.”

Bluntly, if you’ve seen Shrooms, you’ve seen this. But this one has 3D. And is all in German.

Yeah, that’s right… despite the title (no regional title) and all the credits being in English, since its production in 2011, nobody has bothered cobbling together a subtitle track for One Way Trip, so I had to fall back on my remedial German skills to try and follow the plot. Not too difficult as it turned out. Beware spoilers…

Six young adults drive their gorgeous VW T2 – for the first time ever, the same colour scheme as mine!!! – into the Swiss forests to look for a seasonal mushroom with hallucinogenic properties. On route they encounter a particularly unpleasant farmer, shooting wildlife, and his starey daughter, get a flat, and pick up a stranded couple at the garage. Why they were stranded I don’t know, my translation skills failed me. 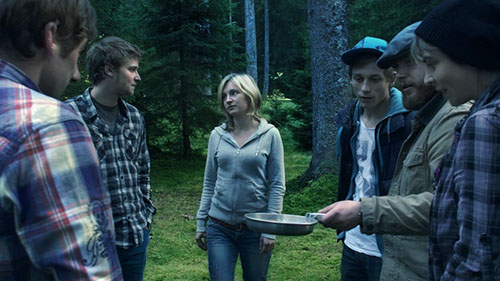 Tents up, shrooms located, the group enjoy their respective trips until Timo is attacked or injured (hard to tell) and needs medical attention. Oh look, a storm is coming in too! Evidently phones don’t work and the drive back to help is further than the farm they locate on their map, so they trek through the rain there.

Nobody is home, so the group sets up in the creepy old house until the nasty old farmer from before pops up. Meanwhile, the usual reasons to go outside crop up and it’s not long before people start dying at the hands of the scarred daughter: One guy is suspended upside down by chains, gagged, has hosiery pulled over his face and then knifed in the eye, there’s a decapitation, a fall on to an iron fence, burning, blades in the back…

Obvious final girl Valerie appears to be the last dame standing, although a couple of the others have just vanished, and she fights with Psycho Farmer in some outside pit. 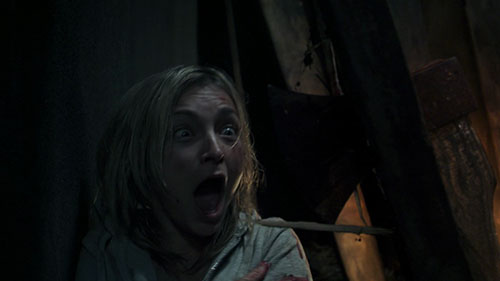 Then we get the twist. Pretty much the same twist as Shrooms, albeit involving more folks. Perhaps some dialogue would’ve made things more obvious, but I was pretty sure that about half the party tripped out to the extent they decided to kill everyone and, well, that’s all folks.

Well made – though the obv. 3D shots are infrequent – with some nice scenery early on, above average production merits and a good chase scene, but it seemed to reach its climax so suddenly I half expected a twenty minute in-hospital epilogue. Perhaps I should re-learn German and watch it again. The most common criticism in other reviews is that the cast all speak the ‘generic’ form of German, rather than dialects more common to the area where the characters are supposed to hail from.

Blurb-of-interest: Sabrina Reiter was also the lead in Dead in 3 Days.

tagged with Euro-horror, get your own ideas!, obvious identity of killer, slasher, spoilers