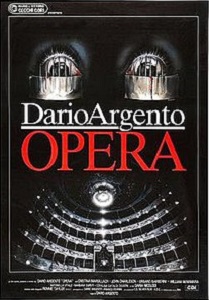 Laughter Lines: “A maniac is after me. I need your advice on what to do.”

In the days before DVD, this one was a bitch to find. Before he realised his version of The Phantom of the Opera, Dario Argento created this giallo homage to it, allegedly also inspired some way by Michele Soavi’s Stagefright, which pitted a group of stage actors against a savage killer in an unsettlingly creepy bird mask. Soavi makes a cameo here as the detective with a bit of chest pain.

Cristina Marsillach is young opera hopeful Betty, who finds herself thrust into the spotlight when the Diva of Verdi’s Macbeth is hit by a car and suffers a broken leg. No sooner does the ingenue begin her run in the role than a psychotic hooded killer begins creeping up on her, tying her up and taping needles under eyes to force her to watch as he shreds through her friends and colleagues. Could this turn of events relate to Betty’s recurring dream about her dead opera-singer mom? Yeah, probs. 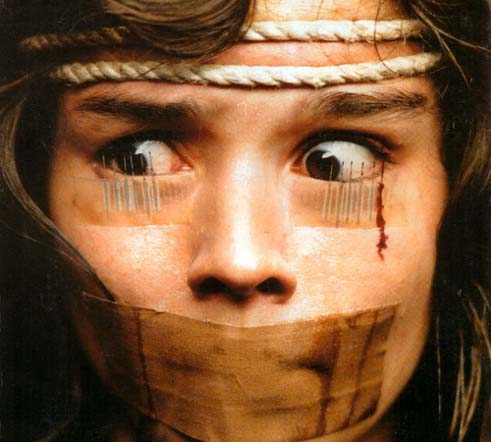 Argento’s trademark excesses rule the roost, with lush photography and an intense score to accompany the requisite gruesome murders: One victim gets speared through the chin, another has her neck cut open with scissors, eyes are pecked out by birds, and there’s a stunning slow motion bullet through the eye. As with some of the other Italian blood feasts though, the one-dimensional characters and contrived plotting devices make things get a bit stupid, even by slasher movie standards. Knowing that the killer always creeps up on her, Betty continually wanders off on her own, while other characters linger too long and too close over the supposedly unconscious killer, or state they’ll “be safe here” when it’s clear they really won’t…

As one of Argento’s most successful releases though, if you can suspended your more superego-biased senses for 103 minutes, there’s a lot to lap up here, most of it coated in a thick gloop of grue.

Blurbs-of-interest: Argento’s other more slashery films include Deep Red, Phenomena, Tenebrae, Sleepless, and Trauma. Of those, his one-time wife Daria can also be seen in Phenomena and Tenebrae; Michele Soavi directed Stagefright and acted in A Blade in the Dark and has a small appearance as the motorcycle victim in Absurd.