I watched the scary, bitey fish flick a few weeks ago and was astounded by how scary and effective it still is. The opening scene notwithstanding, here are three other reeeeally creepy bits:

These days audiences wouldn’t really give a shit if an obnoxious child became lunch for the locomotive-like Great White shark that torments Amity Island. But back in ’75 when a seemingly inoffensive kid just wanted five more minutes on his raft – and literally seconds after a cute Labrador Retriever disappeared in the water (far more harrowing, I say!) – the violent and bloody death of Alex Kintner is fucking terrifying.

The indiscriminate nature of the shark’s pick of victim, the oblivious kids playing in the foreground as those on the beach all stare in bewilderment at what’s going on to the depressingly sad realisation of Alex’s mom that it’s her kid who’s not coming out of the water as a tooth-marked, punctured lilo feebly washes up on the tinted-red shore. Ugh.

A couple of scenes later when poor Alex’s mom has put up a $20,000 reward for the capture of the shark, every man and his dog (except poor Pippet) is trying to bait the animal.

A couple of schmo’s toss a chunk of meat in the water and are surprised when el biggie fisho not only swims off with it but does so with such power that it rips off the end of the jetty, taking one of them with it.

Now, what’s creepy about this scene is that Spielberg, still not revealing the shark, represents its presence by a piece of the broken pier, which floats out to sea and then menacingly makes an about turn before heading back in the direction of the flailing idiot who’s swimming for his life.

It’s a great moment, really capturing how everything in this film was done right and, for me, totally outshines the underwater-head scene that comes later, which is just a jump scare rather than genuinely unsettling. Ugh. 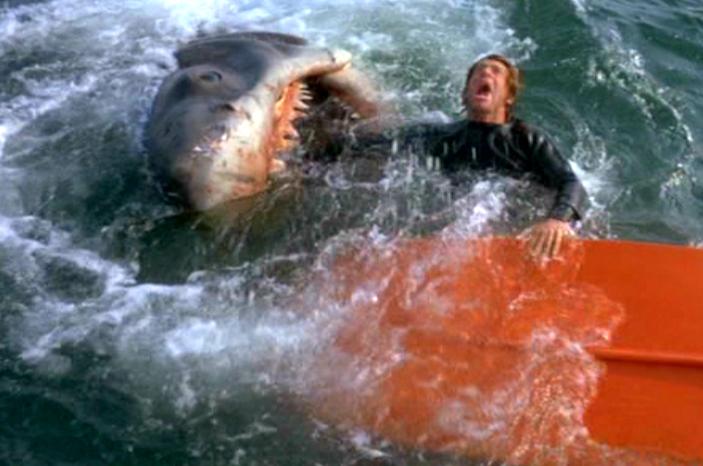 Minutes after some eeeevil children prank everyone with a mock dorsal fin, the shark proper decides to stop by for mid-afternoon munchies and bumps some poor extra out of his rowing boat.

We’ve seen the fin, the tail, and a really eerie shot of the shark inches below the surface as it pulls down the next victim but the audience gets its first fleeting glimpse of the devilish creature when it sticks its head out of the water to grab on to its understandably reluctant meal, whose severed leg quickly sinks to the bottom.

The shark actually looks quite real here, I reckon – and, dayum, how horrible would it be to be that guy – its mouth is huge! Ugh.

tagged with children are evil, spooky, yo! Hollywood