My earliest Friday related memory is seeing a TV spot for a Halloween showing of The Final Chapter when I was in Florida circa 1989: it featured the scene where Jason bursts through the window and grabs Corey Feldman and also the re-used footage of the campfire tale from the opening montage. I was only about 10 so couldn’t watch.

Years later when I became dependent on an almost daily Friday-fix, I kept expecting these scenes to show up. Neither were in Part 1 (and I was also staggered to find that neither was Jason!) and by the time I saved up for my VHS of Part 2 I was to find that that window scene was also absent. The Final Chapter would turn out to be the last of the original films I tracked down. But…the creepy campfire story, it was present along with some of the most effective jump-scares I’ve ever encountered… 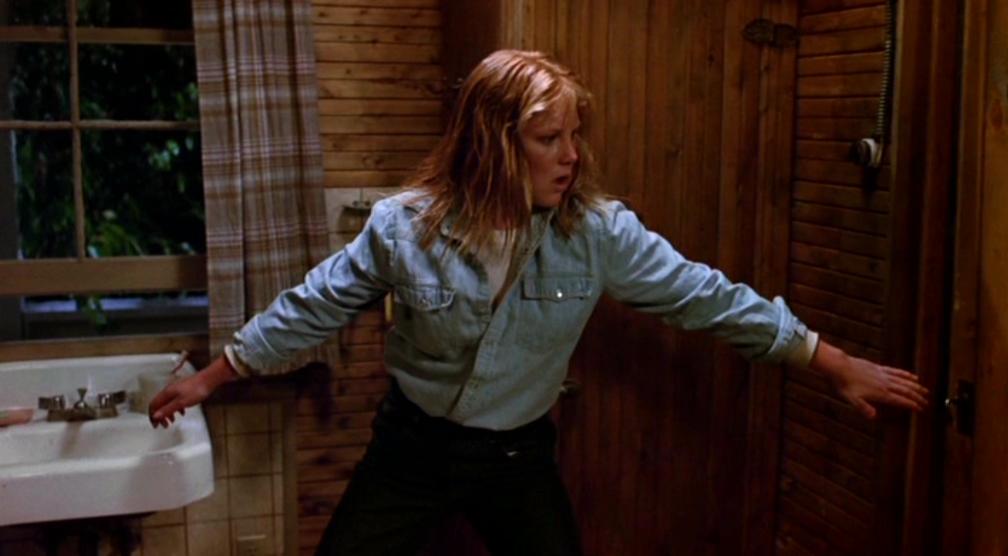 And so it comes to this: my favourite scene in any movie ever. I love this moment so much. Sure, it’s predictable now but the first two or three times I watched it, it succeeded in making me jump outta my skin.

Ginny hides from bag-headed (and so even creepier) Jason in a bathroom that can’t be locked. The soundtrack maintains a tense string note that seems to go on forever as she listens through the door and slowly…sloooowly…reaches for the window… As Vera Dika’s dissection of how these films work keyed in on, we wonder where Jason might’ve gotten to in the meantime. Oh, you’ll find out!

The fact that Amy Steel is without a doubt the best final girl in the history of the genre aids this remarkably well choreographed scene and those that follow as she runs past the camera and into another room. These films might’ve been cheap but they were certainly not hack jobs made up of rubbish edits, crappy synths and ketchup squirts – some real craft went into making them tense and, in the case of this scene, downright frightening, something all too absent in todays boardroom-produced box-ticking exercices that pass for horror.