This was a logistically difficult Pant-Soiling Scene. I only have a clunky old VHS copy of spooky 1982 proto-Final Destination film Sole Survivor so could not use software to grab stills. Instead, I had to hover before the screen with my camera and do my best to capture the creepy.

If you’ve not seen this low-key, slow-burn, rare little gem, it’s definitely one to source. Anita Skinner is the – duh – sole survivor of a plane crash and in the weeks after her recovery, she encounters various people who just sort of… stare at her from afar. 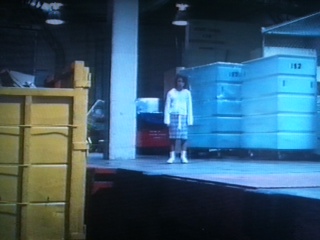 First is this little girl on a landing dock. Actually, the actress in reported to be none other than Susan Jennifer Sullivan: Melissa from Friday the 13th Part VII.

As the film goes on and more of these silent, unmoving (actually dead!) folk appear in parks, on the road, even on her front porch. Always… fixedly STARING.

In recent years, Asian horror has really done this to death but Sole Survivor is genuinely unsettling. From the kooky has-been actress who keeps receiving messages from the other side to the dim photography and zombie-like movements of the stary-squad.

Second choice of eerieness goes to man-atop-escalator when Anita finds herself alone in a car park. 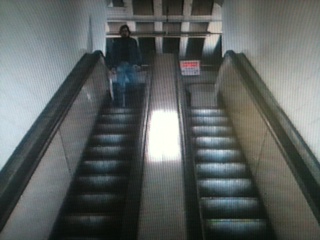 This has the kind of horizon-of-dread tone that the powers behind Final Destination would kill for (in a wild and gruesome way, no doubt); it’s a stark, cold and lonely affair that deserves a hell of a lot more credit than it gets.

tagged with spooky, the 80s