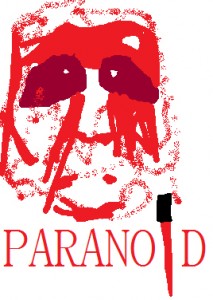 Dire-logue: “If a serial killer was stalking me, I think I’d know.”

I couldn’t find a good enough scan of the DVD cover so I had to draw it with Paint. That’s a bloody face and a knife instead of the ‘i’ in Paranoid. Yeah, I even drew the knife.

Anyway, let this not distract you from learning that this Australian film is an out and out Scream clone, which pretends to be be American. It begins with a girl and her parents being wasted in Sugar Hill, Georgia – “the most boring town in the world” – by a famous serial murderer known by the media as The Conscience Killer, who dresses scarily similar to the loon from Cherry Falls.

A slaughter subsequently begins after a an article about the killer is printed by budding high school journo Sarah, whose twin sister Laurie, we learn, was murdered. Yes, nothing ever happens in Sugar Hill. Four murders!? Move away, man! Move to Tazzie. Laurie had a bit of a Maureen Prescott reputation going for her. Let us stroke our chin and utter a big ‘hmmmm’…

Meanwhile, Sarah’s schoolfriends have staged a Halloween funhouse in order to raise money to send the senior class to the Cayman Islands. Why, I wasn’t sure, possibly to open a bank account. To the surprise of nobody bar the cast: the killer stalks Sarah, kills some extras and then goes for a homicidal home run on the last night of the funhouse’s operation – is it the Conscience Killer?? Is it fuck. 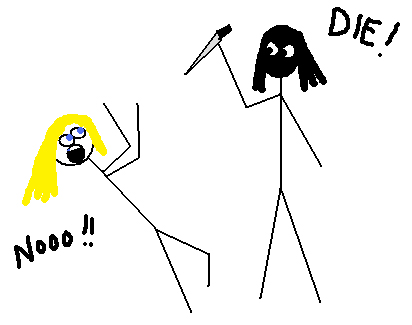 A thrilling screenshot from ‘Paranoid’.

The resolution is far from satisfying and about as convincing as Arnold Schwarzenegger in drag, but apparently “no one suspected a thing!” In all fairness, the young thesps do quite well with the sub-par script but gaping plot holes claim any credibility that happened to be driving by and the score sometimes completely ceases during moments of ‘high drama’ only to return later as if nothing had happened.

But it’s just so lazy… Scream was successful everywhere so why bother trying to pass off a third generation photocopy as anything but a big pile of pants? The Gale Weathers wannabe is even called Kate Windsail!! Windsail!!?

Blurb-of-interest: Michael Short was Chet in The Greenskeeper.

tagged with death on campus, get your own ideas!, Oz, rip-off central, slasher