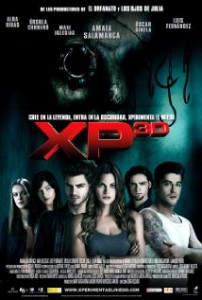 Spain had a great run of internationally acclaimed horror films in recent years from The Orphanage to Julia’s Eyes. But the rule of opposing forces dictates that for each excellent film, you get the likes of The Nun and now Paranonal Xperience 3D!

The stinger here is that things start so well (just like they did with The Nun), as five failing psychology students volunteer for an experiment concerning the paranormal, to document and disprove/prove the myths of a cursed mining town ‘haunted’ by a dead serial killing doctor.

To get the gang there, Angela enlists the services of her self-harming sister, Diana, who owns a van big enough to transport them and their equipment. The sisters have a tense relationship that stretches back to the suicide of their father.

Once in the deserted town of Sasurro, they hypnotise believer Diana, who sees the ‘ghost’ of Dr Matarga released and, as exploring continues, he begins capturing them and killing them one by one.

Or does he? I figured out the twist as the first murder unraveled, which was disappointingly obvious. Worse still, some of the decent gore FX are totally undermined by an abominable CG blood-spurt from the neck during the climactic scene.

Up until then, PX was serviceable, though in true 3D form, the structure of the shots take precedence over acting and script. One such shot features a girl’s ass in tight cut-offs taking up most of the screen, while somebody fiddles with a door in the background.

The secondary “oh, that’ll do!” approach to everything-but-the-3D hangs this one out to dry. A wasted opportunity. 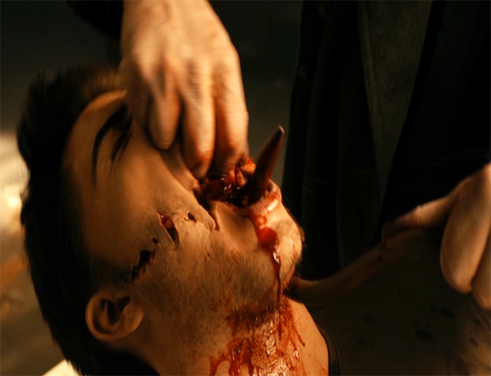 tagged with Euro-horror, get your own ideas!, gore o'clock, obvious identity of killer, slasher