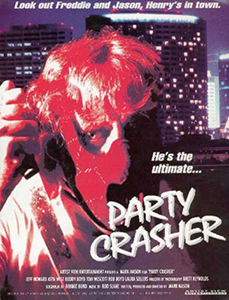 Laughter Lines: “Looks like someone went crazy with a knife.”

I once had some correspondence with somebody involved with this one. They turned out to be a narcissistic bigot, so it was a something of a relief when the film turned out to suck.

Wrapped by 1995 but not released until 2000, this regional cheapo concerns one Henry Primo who, at his sixteenth birthday party, is drugged and subsequently goes on a two-minute killing spree whilst high.

Fifteen years later (never fourteen, never sixteen), Henry (played by the director, always a bad omen) is released from an asylum to live in a secure cell at the home of his well-to-do parents. From this point, nothing remotely interesting happens until the last twelve minutes, when he finally loses it and embarks on another rampage.

The bloated midriff of the film is occupied by Henry’s return to society and the anxieties of his old friends who survived the first massacre, including the guy who slipped him the drugs.

Script desperation culminates in a scene where Henry is invited to receive a special award at his high school reunion! And nobody protests! They even give him a round of applause because he saved a girl from a rampaging dog!

tagged with slasher, what the hell!?, who finances this crap!?