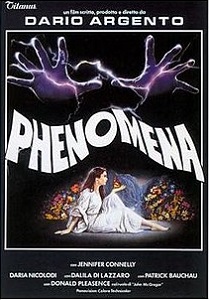 “Jennifer has a few million close friends. She’s going to need them ALL.”

My least favourite Argento outing casts Labyrinth‘s Jennifer Connelly as a slightly obnoxious daughter of a Hollywood star, who is sent to a Swiss boarding school, where the prerequisite mystery killer has been spiriting away the young girls.

Ousted because of her connections, Jennifer is also tormented by the other girls when they learn that she has the ability to control insects using her mind. With the help of Pleasence’s entomologist and his trained monkey (!?), she attempts to identify the killer before she becomes the next victim.

As well as this bizarre plot, Phenomena has a habit of changing its mind every few scenes and not bothering to explain itself. The killer’s motive is never revealed there’s a glut of unresolved plotlines and inconsistencies. The usual lush score that grace Dario’s pics has been replaced by nauseating hard rock from the lies of Iron Maiden and Motorhead, thus unbalancing the atmosphere built up by the typically perfect photography.

This may well have been written as it was being filmed, as so many elements turn up in the finale that weren’t even hinted at beforehand, and the psychic-insect thing proves virtually ancillary for the most part. Connelly does the best she can with her jumbled character, but this is a surprisingly weak flick given the talent at work.

Blurbs-of-interest: Argento’s other slashy outings include Tenebrae, Trauma, Sleepless, Deep Red, and Opera. Of these, his one-time wife Daria was in Tenebrae and Opera; Donald Pleasence was, of course, Doc Loomis in five of the first six Halloween movies, and also appeared in Alone in the Dark.