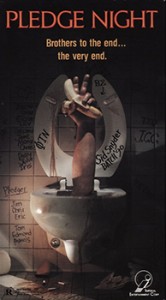 “Brothers to the end… the very end.”

A.k.a. A Hazing in Hell; Death Night

Laughter Lines: “Two of my friends are dead and you’re telling me to ‘sleep on it’!?”

Fraternity dickheads initiating six pledges at the same house where a hippie died in a bath of acid during Hell Week in the sixties, stir up his vengeful spirit and soon find membership in a rapid decline before next semester.

Our Freddy-lite killer, Acid Sid, is an archetypal hippie, complete with headband, slurred speech, and was the boyfriend of one of the new pledge’s mothers, setting things up for a howlingly obvious twist when we’re down to the last two kids left alive.

Not a decisively bad film, but with a forty minute wait before the killing begins, the build needs to be decent, and it’s not. Instead, it’s pumped out with frat boy antics and a five minute flashback to explain the demise of Acid Sid.

In true post-Elm Street style, Sid has a naff one-liner for each kill, while the off-the-shelf victims bring new depths to the meaning of stupid (“No, I’ll stay here – you go for help”), or jockey themselves into inescapable situations caused by much aimless wandering about the closer we get to the finale.

Some good FX work and no shortage of grue – including a cherry bomb up the ass for the spiteful ringleader – but slack pacing and understated characters who are clearly a lot older than the roles they’re playing foil any hope of making an impression.

tagged with death on campus, get your own ideas!, gore o'clock, one two Freddy's coming for you..., rip-off central, slasher, the 80s