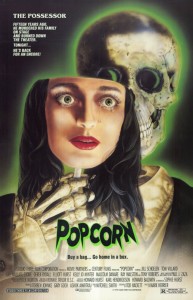 Dire-logue: “Tina should start eating more, she looks like shit.”

The ever lovely Schoelen discovers that her recurring nightmare is actually part of an old horror film called The Possessor. Meanwhile, her fading film class decide to hold an all-night festival of B-movies to raise some funds to keep things afloat but find themselves set upon by a hideously burned figure, believed to be the director of the old film, who died in a fire at the same theatre years earlier, taking with him several cult followers. That’s a lot of useful coincidences.

Expectedly, the group are stalked and killed, albeit in reduced numbers and in ways that aren’t a stones throw from co-burn victim Freddy Krueger’s teen-tamperings. Alas, the mystery killer’s identity is revealed a bit too soon after only knocking off a handful of victims in the process. Schoelen – who replaced original actress Amy O’Neill – is her useful alluring self. Popcorn was one of her final films before she withdrew from the film world in 1995.

While the film is entertaining once, it’s not a great outing for Jill and also several of her co-stars who are wasted in minor roles. The late Villard is good as dorky student Toby and the trio of films selected for the festival (presented in Smell-O-Vision with a giant mosquito and various other fourth-dimension tricks) provide an amusing backdrop.

(Surprisingly) shot in Jamaica, Popcorn performed dismally at the box office as the genre bottomed-out into the early 90s. Treat it like public transport, enjoy the ride and then leave it behind.

Blurbs-of-interest: Jill co-starred with Robert Englund in the slasher version of The Phantom of the Opera and was also in Cutting Class, When A Stranger Calls Back and The Stepfather. Dee Whatever-She’s-Called-This-Week was also in Scar (not the Angela Bettis one), Dead End Road, the Halloween remake, and Red Christmas; Kelly Jo Minter was in A Nightmare on Elm Street 5; Derek Rydall played the lead in Phantom of the Mall: Eric’s Revenge; Karen Witter was in Out of the Dark.