Play nicely with your powertools 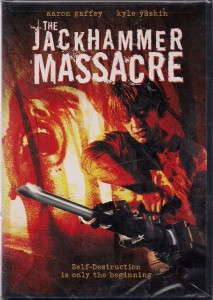 “Self destruction is only the beginning.”

Another low-end Castro production, but the budget is up from Maniacal and Butchered this time.

A young man – contrivedly named Jack – spirals into drug dependency, following the fatal overdose of his friend and, when a couple of thuggish debt collectors turn up at the warehouse he lives/works in and inject him with a fusion of lethal shit, he embarks on a hallucinogenic-fuelled killing spree without having to leave the confines of the building, as a succession of luckless nobodies turn up for various reasons – one of whom gets the jackhammer up her arse!

The first half hour attempts to build depth into the story, but as soon as the bodies start dropping it all descends into the usual sloppy gorefest, complete with amateur-night performances and the longest power cable in the world, supplying an electrical flow for the titular weapon.

Still, on some level it’s worth admiring Castro’s passion for the genre, though you might want to ensure you’re on some kind of acid trip of your own if you want to wring much enjoyment from this one.

tagged with gore o'clock, slasher, slasher films that aren't supposed to be funny but are funny, who finances this crap!?