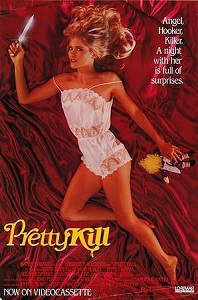 A.k.a. Tomorrow’s a Killer

“Angel, hooker, killer. A night with her is full of surprises.”

Laughter Lines: “What kind of girl are you looking for? …well that’s kind of an unusual requirement – not too many people play the harp.”

“Now on videocassette” – as if it was ever going to grace the silver screen.

Terminally dull trash that begins with a guy depositing the body of a murdered hooker into a river and then nothing remotely horror related happens again for eighty minutes. That’s longer than a lot of these things run.

The rest of it is largely about cops trying to bust a drug dealer. Meanwhile, lead cop’s wife/girlfriend/whatever is an uptown madam (Hubley) who rescues girls from the street and pimps them out to various ambassadors n’ shit. She takes in naive southern gal Francie who quickly demonstrates that she’s unhinged, copying her hostess’s style in a creepy proto-Single White Female gesture, talking in her sleep in different voices, and blacking out.

It’s of course a surprise to precisely zero audience members that Francie is the killer of a whopping three people (two of which occur off camera), eventually attacking Season Hubley while skipping between personas.

A colossal waste of Yaphet Kotto and some other semi-knowns. Canuck slasher fixture Lenore Zann makes an appearance and the little blonde girl is a young Sarah Polley, plus singer Belinda Metz is in it somewhere. Unless you’re in search of a cure for insomnia or Suzanne Snyder’s hilariously terrible portrayal of multiple personalities, there is nothing to recommend here. I even have trouble categorising this as a slasher movie, but I want to make the world a better place than I found it, so if this review saves you some time, I’ve done my part.

Blurbs-of-interest: Season Hubley was also in Stepfather III; Yaphet Kotto was in Freddy’s Dead; Lenore Zann was also in Happy Birthday to Me, Visiting Hours, and American Nightmare.

tagged with before they were famous, Canuck, gay stuff, obvious identity of killer, the 80s, who finances this crap!?