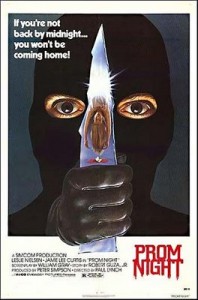 “If you’re not back by midnight… You won’t be coming home.”

Dire-logue: “For a guy so fast on the dancefloor, you are the slowest!”

Life is a ballet where the dancer falls, or some such wisdom once sang the lovely Bucks Fizz. Indeed, if life is one big, merry dance made up of moshers, ballroom, jivers, Steps-lite routines and High School Musical glee, then why not swirl it all together in one big cocktail of super-fun-happiness-yeah!

Now, mixing the rumba that is Halloween with the delicate ballet of Carrie sounds pretty cool – but tossing in the grooves of Saturday Night Fever!? That’s Prom Night for ya! No, not the shitty remake. That was akin to mixing ice cream with shit. We’re talking about the original, one of the earliest and most successful low-rent attempts to take what John Carpenter did, go to Canada, and add a bit more stab n’ drip to it.

As was the case in all of the stalk n’ slashers of olde, things begin in the past. Not 1732 or anything, but six years before the main section of the film. At a creepy old school, four kids are playing a macabre version of hide and seek they call ‘Killer’ – totally a riff on the formula. Along comes Kim and her younger siblings, boy/girl twins Robin and Alex (in matching stripy sweaters just to labour the point), who are, in no uncertain terms, told to go away by Kim’s classmate, Nick.

Kim and Alex continue in different directions while little Robin decides to take a closer look at the workings of the game of ‘Killer’, which culminates in the nasty little brats ganging up and scaring her until she takes a tumble backwards out of a window…to her DEATH!!!

The kids quite coldly under react and make a pact never to tell and the death is blamed on a handy mental patient who is then burnt by fire and incarcerated. Six years later – to the day, natch – Kim and Alex, now model teenagers and offspring to straight-laced Principal of Hamilton High, Leslie Nielsen (!), are prepping for the school’s senior prom, where Kim will be crowned queen along with her boyfriend… sister part-killer Nick! Complex, ay?

Being that Kim is played by Jamie Lee Curtis, we know she’s the final girl from the outset and, as usual, JLC delivers a great performance in spite of her worst slasher hair-do (including her looney-bin wire mop from Halloween: Resurrection). Nick (the late Casey Stevens) is the only participant in Robin’s death who seems to harbour any remorse. Two of the others, Kelly and Jude, are Kim’s best friends! You’d think they’d be smart enough to give her wide berth considering they killed her lil sis! But no, this is a slasher film and thus character sensibility has no place here!

Jude is the not-as-pretty girl who couldn’t get a prom date until porky wannabe-playa dork Slick turns up and inexplicably wins her affections. Kelly is the jittery chick who can’t work out whether or not she should let her pushy boyfriend enter unchartered territory. Then there’s Wendy, former ringleader of the guilty group, bratty then, mega bitch now…and clingy ex-girlfriend of Nick’s. Wendy therefore hates Kim and recruits school bad-boy Lou to organise a prom prank that will see them sabotage the crowning ceremony and humiliate Kim and Nick forever! Ooh, the melodrama! It’s just like an early incarnation of Degrassi Junior High.

…plus retarded caretakers, bums, and dope

Meanwhile, Kelly, Jude and Wendy have all received crank calls from a whispery fiend who says he’ll see them at the prom. Despite their past crime and some major hinting from the caller, none of the girls seem to take much notice of the warning. Nick blissfully misses his call altogether. Elsewhere, the man convicted of Robin’s murder has conveniently escaped from his mental insitution and murdered a nurse in doing so. The rent-a-shrink supposes he could return to town to seek revenge! There’s also the slow, drooling school custodian who turns up to stare at pretty young girls intermittently (especially when mooned) – is he more than just a red herring. Is he, huh?

The pieces are on the board, now it’s time for action! Yes, the prom finally begins and brings with it some much needed killing. It’s almost an hour’s wait for the debut murder, a vicious throat-cutting with a shard of broken glass. However, this horror pales when compared to the disco-dance scene when Kim and Nick decide to ‘show Wendy how it’s done’, cheered on by their evidently high classmates, the overlong sequence is overflowing with horrible moves that make the sugary routines in High School Musical look like funeral marches. Jamie Lee spins, twirls, makes bizarre Semaphore-like signals with her arms, and does this bizarre above-the-head clapping motion…

More sanely, Jude loses her virginity to the ironically-named Slick while Wendy and Lou scheme to hijack proceedings. Alas, the killer intervenes on both counts, doing away with the young lovers first and then chases Wendy for ages around the deserted school. It’s a great scene, the best in the film, and has rarely been matched in subsequent efforts, flawed only by the fact that ultimately we don’t get to see the film’s nastiest character buy it on screen, having to settle instead for hearing the thwacks of the ski-masked killer’s axe going into her head. 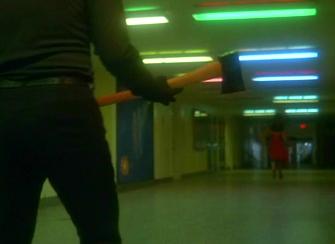 The piece de resistance of the killer crashing the prom proper and mistakenly beheading Lou instead of Nick is the sweet topping on this cheesecake. It leads to a disco-floor showdown between the ‘mystery’ killer, Nick, and Kim, which is almost as awkward as the dance scene from 20 minutes earlier, and backed by the same over-energised disco songs (“prom night / no more feeling uptight / everything is alright…”) that sound like the worst of ABBA covered by Alvin & The Chipmunks… Kim manages to subdue the fiend and the requisite unmasking occurs with heartbreaking results for her. 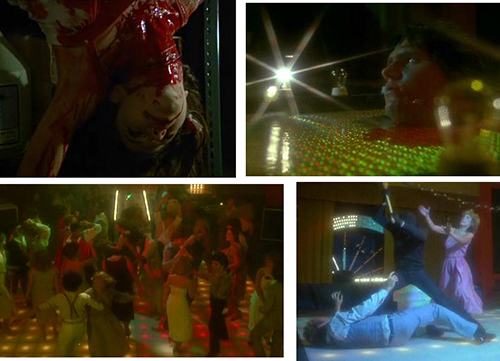 Prom Night is essentially a nicely done revenger but leaves a few loose ends – some primary cast members disappear from the film completely with no explanation. The premise was echoed in I Know What You Did Last Summer seventeen years later, despite being based on a book written in 1973. It gains more from its cheesy composites than it loses, with a good cast playing mostly nice characters, Wendy’s great chase scene, the paperthin cloak n’ dagger act and the broadcast ‘thoughts’ of some of those involved. A lot of people don’t like Prom Night because it’s slow and not very wet with grue, and I’d like to say they’re WRONG! But my inner-Buddha democratic self will not allow it. For Vegan Voorhees, it doesn’t get better than disco NRG, an axe-wielding killer and Jamie Lee fucking Curtis – what more could there be!?

The sequels were variable and largely unconnected aside from Hamilton High’s presence in all four; #3: The Last Kiss is the best of which. The 2008 remake recycles only the brand name and general theme but was so watered down it doesn’t merit being affiliated with the franchise at all. It’s horror for 12-year-old girls, and an antithesis of its own genre.