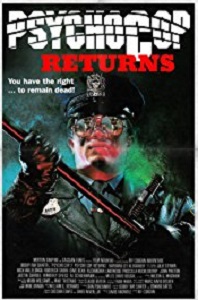 “He’s the life and death of any party.”

Laughter Lines: “Anything you say can and will be considered extremely strange because… you’re dead.”

It’s like twenty years since I picked this up on VHS at a time when the first film hadn’t even been released here. Not that you need it to follow the relatively simple opus of big dude kills office bods at an after hours party.

With each demise, Shafer has a Krueger-esque quip to add, many of which are groan worthy, and the film can’t help itself from leaving the door open for the sadly never realised opportunity that would’ve been Psycho Cop vs. Maniac Cop vs. RoboCop. Amusing in a ten-years-too-late kinda way, but viewing the trailer earlier I wasn’t tempted to watch the whole thing again. Curiously, it took one week to film in 1992 but remained unreleased until mid-1994.

Blurbs-of-interest: Shafer had a small part (as a cop!) in Monster Man; Director Rifkin acted in Bikini Island and Last Dance, the latter also featuring Kimberly Speiss; Julie Strain was later in Bleed.

tagged with Nu-di-ty, sequel city, slasher, what the hell!?