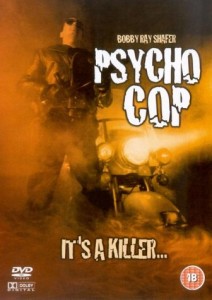 “He always gets his man… And everyone else.”

Dire-logue: “Quit being so paranoid – you sound like one of the girls.”

I saw Psycho Cop Returns before its source material and therefore wasn’t expecting miracles. Sometimes it’s better to have low expectations… Like when you’re going to the airport and dread the death march that is boarding your flight. That way, when it doesn’t turn out to be quite so bad, you can skip off at the other end feeling chipper.

By the time Psycho Cop came about in 1989, such slasher flicks were already garnishing themselves with a sort of proto-Scream awareness. They were going for laughs over genuine scares and while a lot suck donkey dick, some are good for a once-in-a-while viewing (Dr Giggles comes to mind). Psycho Cop just about squeezes itself into this category by totally not taking itself seriously. I mean, the title alone sounds like a parody of Maniac Cop, which sounded like a spoof of RoboCop and so on till we all die from laughing too much.

In the film, another convertible load of teens game for “one hell of a weekend” meet their maker thanks to 6’4″ Satanic loon copper Joe Vickers (Shafer), who has been missing from his precinct and is suspected of a murder. That’s it for plot: the first hour is made up entirely of the cheery chap stalking his opaque intended victims, who spurt lines like: “who’s out there? Answer me!” and, when confronted by the axe-toting killer, one victim gasps; “it can’t be!” as if Psycho Cop is her estranged uncle. Elsewhere, a girl looking for her hairbrush concludes it’s somehow made its way to the woods of its own volition…

‘Tis no surprise that psycho cop manages to do away with the dunderheads until the obligatory sensitive (and therefore smarter, but less fun to watch than their remedial friends) kids have to duke it out with him. Aiding it’s general sense of tolerable-ness, Psycho Cop is well put together, has a couple of hair-raising moments and even some of Vickers’ Freddy-lite one-liners bring a wry smile every now and then. One for you lovers of seemingly deliberately bad horror and the killer cop sub-sub-genre.

Singular blurb-of-interest: Bobby Shafer returned to the role for the as-good/bad 1992 sequel.